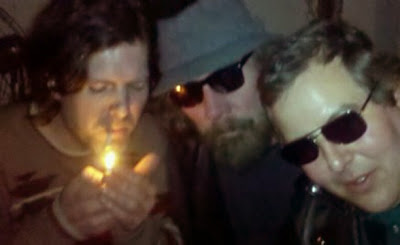 Now I know you're well aware that I simply do not write these, what are they called again... oh yes, long-form pieces anymore (that is anything longer than 140 characters), but tonight [now like three weeks ago -- long-form pieces are hard -- ed.] was such a blastitudinous night, such a study in sustained exalted blastopoetics, that I just have to take the plunge and tell you all about it. The evening began with me jamming a podcast special-guest style with Tyson T. at I Hear A New World studios. He's an old friend, and over the last few years he created and released a strange and heavy album that I wrote very nearly 140 characters about a while back. But that's a friendly tangent. I also enjoy his podcast because it really is, as the Blastitude slogan would have it, "about the music." He's done like 4 episodes and I think tonight we laid down #5. My contribution was an 8-song set of some of my favorite 1970s deejay tunes from Jamaica, two tracks by U-Roy the Originator, a bit of Welton Irie, the classic 1979 jam by Lone Ranger about that vampire "Barnabas Collins" (Ranger sez: Barney will chew your neck like a Wrigley), my favorite discovery of 2010 "Minister For Ganja" by Rapper Robert & Jim Brown (released on 7" in 1982), and "Stop The War" by Dillinger, from 1976. During our 'heavy conversation' portion of the podcast, Dillinger's lyrics about "that's what the prophets shall reveal... thou shall not steal, thou shall not steal" got me trying a little too hard to define roots reggae, because roots, like reggae itself, is both very simple and very difficult to describe. I wish I would've just said that it's a blown-out minor-key-laden protest/lament/revival music about the centuries-long biblical level of Jamaican ghetto suffering, but I just didn't have the words at the time.

That didn't stop us from blabbing though; we didn't even get into Tyson's modern dancehall playlist because I was going on about the History of Blastitude music book that I'm in the process of, ahem, taking notes for. (Coming sometime in 2012: The Two-Page Outline!) As part of my spiel I bring up the Nautical Almanac/Stare Case show I'm about to go to, a mere mile away from the IHANR studio and mere minutes away from starting, relating both bands to my bell curve theory regarding technological progress in music, wherein we have just left the plateau of the bell curve and are starting to work our way back down the other side. Music has been with us the whole time and will always be with us, but the technology has advanced rapidly over the last century, and therefore musical approaches have as well. The plateau was finally reached from roughly 1970-2010, in which time all of the final useful advances possible in musical technology, volume, speed, density, and communication have been innovated and experimented with. A ferocious run from punk to hardcore to noise and into the void tore the whole thing open, and now the dust has settled and we can see and use everything that got us to this potentially liberating zero point, all at once. The gadgets are still here but we can take them as we retreat back into the only things that have mattered throughout this entire curve of social history: singing, playing, creating with sound, having something to say, none of which even require electricity.

And whaddayaknow, all this blather starts to strangely tie right into the show I'm starting to become late for. The band Stare Case is a duo made up of Nate Young and John Olson, who you might know as 2/3rds of the long-running noise rock legends Wolf Eyes. The new band's slogan happens to be "BLUES ROOTS," and they mean it, and for them to come out of the noise scene, and particularly a key plateau band like Wolf Eyes, playing a quieter music with discernable musical motifs and tons of wide open haunted space, indeed represents a return to roots, a dialing back, a retreat from the oceans of noise back into everything that led up to it.

So yeah, I've gotta get to the show. Stare Case is the one band on the bill I HAVE to see, after being very intrigued by a 20-minute live youtube and an advance track from their new-release debut album on DeStijl Records, and I have to see Nautical Almanac too (for the first time since 2002), but sure, I would like to see Chicago-based openers Baby Birds Don't Drink Milk and the "gaddafi inspired jams" of Piss Piss Piss Moan Moan Moan too. Only so many hours in a day, etc. I get there with in fact 5-10 minutes left in the latter's set. It's dark in there and it seems like a cool tucked-away Humboldt Park loft space. The band is jamming, looks like a duo, with a young woman up front doing massed effected vocals and working a massed effected theremin. Young man drummer is playing a hard driving and extrapolative disco beat. Crowd is nodding, good vibe, meat-and-potatoes heavy experimental jamming of a sort that Chicago has always been good for cranking out, at least for the ten years I've lived here. After they're done, teardown and setup procedure slowly reveals that the next band is going to be Stare Case, and I'm feeling excited like a middle schooler at his first punk show. A band is going to do something special, and, if the cops don't show up, I'm going to get to watch and listen.

After they start playing, I get even happier. It might sound corny to you, but I'm going to say it because it's true: I've been listening to these guys make music for over 10 years now, all kinds of noisy jams, and I am honestly so proud of them for taking this step with Stare Case. Because it really is a bold step back, a true dial-down, and that takes a lot of guts to do in this age of wall-to-wall blown-out internet insanity. It proves that they really love and care about music, not merely trends that have correct sounds attached to them. It's like this Albert Einstein-attributed quote that I swear I just came across: "Any intelligent fool can make things bigger, more complex, and more violent. It takes a touch of genius -- and a lot of courage -- to move in the opposite direction." Blues & roots, very sparse, patient, and earthy music. Young, who was/is the singer (and floorshaking programmer/electronicist) for Wolf Eyes, not only plays a bass guitar in Stare Case, he plays cleanly picked two-and-three note riffs and beautifully spare desert-blues solos that are definititely part of the good old pentatonic scale. Olson plays various reeds and wind instruments, as he has done with several bands before (most notably Graveyards), and his snake charmer lines come right out of quieter post-Coltrane post-Evan Parker modal/circular jamming from the 1960s on. And that's basically IT. Bass guitar and reeds. The rest is Young's vocals (certainly similar to his Wolf Eyes style, but quieter and sharper, and you can hear most of the words, which are very good spare monologue) and Olson's intermittent surges in incidental creep-zone electronics and steady simple shaker percussion. That said, the band never abandons its noise roots either. There was a point mid-set when they did a good 2 or 3 minutes of bare dark investigational ambience that could have come right out of a quieter part in a Wolf Eyes set, but here it worked its way out of or into another killer two-or-three note bassline, another utterly patient Olson drop-out, another SONG. Another BLUES song in fact. With audible ROOTS. Gig of the year, I mean the century, for me.

Nautical Almanac were great as well. You might say, in response to my bell curve theory, that Nautical is a plateau band that are more about the gadgets than they are the music, because they rewire circuits and broken electronics and then react -- maybe musically, maybe not -- to whatever noise it spits out. It's a good point, but it really doesn't matter whether you put gadgets or music first as long as you put soul and personality before both of them, and they always have. Tonight it was the Twig and Carly duo, Twig sitting down at the classic junk gear scrap table and running heavy flowing electronic shadow worlds, Carly running the environment via a sheet hanging on three tall tepee poles with home movies projecting on it, spilling off onto the wall behind it, on the wall opposite it, everywhere in fact, constantly crawling and jumping, Carly moving around with the projector cradled in her arms. It was a brain eraser, and I was worried if I would even be able to write about the show with Nautical being the last band. Not that I was about to pull a 'Cage and Feldman splitting after the Webern portion [see paragraph 3]' or anything....

And as long as everything is relating back to everything else, I should mention how the night ended. I was checking out the merch table, my mind already swirling with thoughts of roots, blues, reggae, noise, and much more, when some dude nearby started singing loudly and soulfully and with perfect pitch, "Is this love, is this love, is this love? That I'm feeling?" I was feeling it, because I love that song (you'll have to check out the podcast for my defense of Legend . . . although I call it Marley's "best work" which was totally incorrect, that would be the Soul Rebels and Soul Revolution albums he cut with Lee Perry), and I swear it set off scattered responses throughout the room, people answering back with "Is this love"s of their own and maybe even an "I-ee-eye-ee-eye-ee-eye... am willing and able..." or two. AND THEN, when I left the show a little bit later, and got out to the car after this incredibly blastifarian night of heavy roots jamming, what should be cranking on the FM radio, dialed as it often is to 97.1 The Drive, but, well: http://www.youtube.com/watch?v=oFRbZJXjWIA