NOTES:
1. Good morning, you are listening to Radio Blastitude, WBLSTD 66.6 FM Chicago. My name is Larry 'Fuzz-O' Dolman and I'll be with you until 8AM, thanks for tuning in. This has been Träd Gräs och Stenar from Sweden with "Rock For Kropp Och Själ," the title track from a 1972 LP release on Silence Records that I don't believe has been reissued. That's "Rock For Kropp Och Själ," easing you into the 6 o'clock hour. Time now is 6:23 AM, we should have sunny skies today, topping out around 78, another glorious late summer lakeside day here in Chitown, so now that we're eased in and waking up we're gonna pick up the pace a little, get the day going. We're not gonna pick it up too fast, don't worry about that, we'll give you a chance to rub the rest of that sleep outta your eyes with this number by the Sic Alps, new on Important Records, it's actually a Throbbing Gristle cover, it's called "United".....

2. Sparks tune is from the Giorgio Moroder produced No. 1 In Heaven album (1976). Selection inspired by the voluminous Sparks discography rundown by Ned Raggett in Arthur #29, it was very nicely written, I can't believe I read the whole thing.

3. "Day" by Omar-S is exactly what house music sounds like in my dreams. It's between that and Gas Konigsforst anyway. "Day" is just perfectly pitched between fast and slow, hard and soft, minimal and lush, R&B and whatever. "'Is that all the record do?'. Yeah bitch, that’s all the record do. Yep your lazy ass needs to do some other shit with it."

4-6. Okay, the reggae tunes are in there via the new Magical, Beautiful mix CDR release, Nearer My God In Spring, on his/their own I Hear A New World label, catalog number IHAN07 in a sweet chipboard case-thing, and I'm telling you, this mix is incredible, it's been in my player for like three weeks now. Just good tunes. Like the man says in the liner notes: "Thank you musicians & sound engineers for this wondrous music. This is great inspiration & beauty."

7. Flipside to "Day" is "Night", it's a 12-inch on Omar's FXHE label. Check out his website where you might be able to get one direct.

8. Flying Canyon might be in my Top 10 Albums of the 2000s. Definitely my favorite Glenn Donaldson production ever, with Orchards and Caravans by The Birdtree and Blood of the Sunworm by the Giant Skyflower Band the closest contenders. RIP Cayce Lindner.

9. An original DGC cassette of Nirvana MTV Unplugged In New York (Live) has been floating around the day job for a few years now. No one knows who brought it. It's been suddenly getting a lot of deck time lately, and it truly sounds better than ever, the warehouse crew all agree. RIP Kurdt.

10. "Ghost Ghat Tresspass" is part of the epic 30-minute-plus track "Ghost Ghat Tresspass/Sussmeier" on the 1996 2CD 330,003 Crossdressers From Beyond The Rig Veda, documenting an improv between Sun City Girls and violinist Eyvind Kang, "live at Bottom of the Hill in San Francisco," probably their 11/21/94 gig. "Ghost Ghat" should be heard by everyone who complains about SCG's wild berzerker improv because it is a sinuous, snaky modal jam with everyone at top form. You gotta hear the way Rick Bishop's crunchy e-bowed (or volume pedaled) (or who knows what) electric guitar and Kang's always-genius violin blend and elevate each other, while the AB/CG rhythm section slowly roll out the scroll underneath. For more great SCG/EK jams (from different shows) check out the VHS tapes The Burning Nerve Ending Magic Trick and If It Blows Up...Park It! And for just a little bit more info check this out. 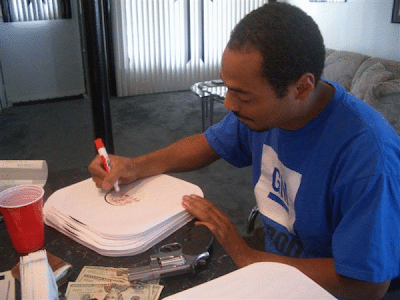 Behind the scenes with Omar-S