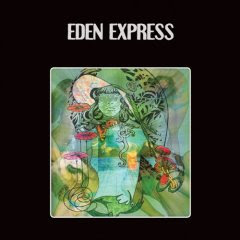 Oh yeah, another new record I've played more than a couple times lately is the one by Eden Express. It's called Que Amors Que, it's on Holy Mountain, they're a trio that share a member with that band Cloudland Canyon.... I haven't heard CC, but EE has done the unthinkable and released a post-1974 album openly influenced by Tropicalia and/or Lounge that I can actually hang with. Yep, these tunes have got the "oohs" and "aahs" and cute jazzy rhythms, but it doesn't work for me as a song album so much as a sound album, with a fuzzed-out hazy edge that can often be just a little sinister. It's also a pretty chilled-out album - in the words of H.M. C.E.O. J.W. himself, it's "as close to NPR and white wine as I'm going to get" - but there's always something odd like reverbed whispers and cackles or other errant noises coming or going in the shadowy corners of the songs. Or, maybe I'm imagining all that, but that's just as good.
Posted by Larry at 6:21 AM