NOTES:
1. Stones thing is Keith doing the Beatles song solo, from the Acoustic Motherfuckers bootleg. Turns out it's from 1993, an outtake from the Voodoo Lounge sessions! He does sound old and weary and vampiric and all that but still plenty of soul, no Miller Lite Sponsorship vibes.
2. For more Big L, check out this "freestyle with Jay-Z" youtube. This was on the radio sometime in the late 1990s. This thing is amazing, someone transcribed it here. "Niggaz hear me and take more notes than Connie Chung/My clan plans to get Giuliani hung." Jay-Z is great too: "Jigga incredible/Even my thoughts is federal/Like kidnapping, extortion and corruption/So you know, beatin me will never come/Like a nun or tomorrow, I'm too thorough..."
3. "New Rap Language" is just killer, relentless, if you haven't heard it check it out. 8 minutes, A side of 12" single from 1980. With live congas, now that's old school.
4. For an interesting onstage tour version of Sebadoh's "Violet Execution" from 1991, the year the album came out, check out this YouTube (no video, just audio). Slower, no drums, more explicitly melancholy, lyrically incomplete (which can be a good thing, those lyrics are just kinda gross).
5, 6. "Hole In My Head" and "Stars Say No" are tied for my hit single of the year.
7. "Police Story" is the Dez version from Everything Went Black.
8. "My Old School" is from the Memphis Blues Again bootleg. "Recorded live at the Ellis Auditorium Memphis, TN. April 30, 1974."
9. Before he was a Yo! MTV Raps one-hit wonder, Pos K recorded this 12-inch for the same label that put out "Top Billin" by Audio Two.
10. Saw Connect Force crew breakdance to a remix of the Chubb Rock tune today at the Glenwood Avenue Arts Festival, for which Chubb's lyric "No hatred, the summer's almost done" is a sweet summation. I've enjoyed this festival for five years in a row now, it's right outside my window and the streets fill with that distinctive East Rogers Park "the Venice (or is it Hermosa) Beach of the Midwest" thing at its late-summer finest. Always good food and music and the people are amazing. No hatred at all. Another big musical highlight today was approaching the Morse Avenue Stage in the noon sun looking for the Grande Noodles booth while Tomeka Reid was busting out a sweet long unaccompanied modal/out jazz cello solo, playing with a Jimmy Bennington trio. Through the rest of the set she was using the cello to play the role of a standup bassist, doing some sweet walking lines. I realized halfway through that I had seen her play beautiful music a couple times in Nicole Mitchell ensembles.
11. From the unedited transcript of The Wire interview with Mad Mike Banks of Underground Resistance: "The guy who really laid the blueprint for Detroit Techno, you know him many times he's been mentioned - in fact a woman in France, Jacqueline Caux did a movie about this guy. His name was Electrifying Mojo. Mojo was a Vietnam war veteran, he was a radio man in Vietnam, he did DJing for the troops, and that's where he learned all the different types of music from around the world, and when he got back from Vietnam, he brought that to Detroit, that perspective, so we got to hear progressive rock up next to Falco, Euro synth pop. Of course he introduced Kraftwerk, which for Detroit was huge, he introduced Prince, George Clinton, all these great synth artists that used synthesizers for bass lines and stuff. 'Flashlight' was first played, I'm sure, in Detroit, because Mojo would break the records for the artists. He broke Juan [Atkins]'s early records, Juan's early Model 500, Cybotron stuff. We were really blessed with that wide perspective. I thought it was happening all over the country, because Mojo was so huge, but of course it wasn't, it was only happening in Detroit. So I think he really opened up the ears, and the inspiration, and the minds of young Detroit kids, and I think that's where the whole concept for Detroit techno came from, from Mojo." 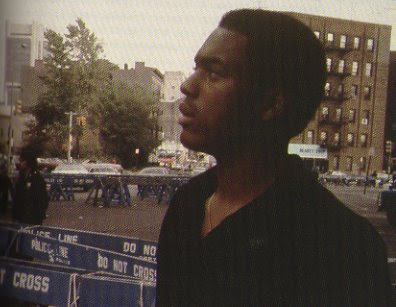