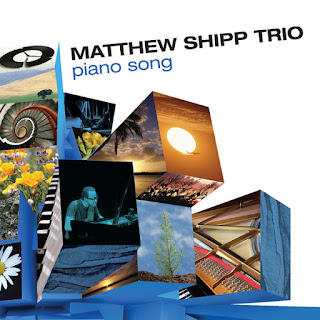 I know there's approximately 8 million amazing podcasts out there that I really need to start listening to, but one of the few I actually have is Kreative Kontrol with host Vish Khanna. The pod persona that he casts is that of a friendly and thoughtful music-loving resident of Guelph, Ontario, Canada, with guests from all across what could be generally classified as the indie/underground rock spectrum, including, in this case, long-time underground-rock-friendly jazz pianist Matthew Shipp. Interviews with Shipp are always good, so I jumped right on it, and not only has it introduced me to his terrific new piano trio album Piano Song, it's got my head brewing on several lines of thought that his words and music have set it on, such as the reality of inner space vs. the outer world, the realms and possibilities and usefulness of the imagination, forms of language that do not use words, and more, all as interpreted through one of my personal favorite musical archetypes, the jazz piano trio. I got so worked up by the interview that I dutifully transcribed a few key exchanges between Khanna and Shipp, but there's a lot more to dig into, so by all means go listen to the real thing, where you can also hear excerpts of this great new album.

SHIPP: [talking about the song "Cosmopolitan"] I view the album as a city. To me, all my albums are metropolitan landscapes of the mind . . . a lot of my albums are involved with trying to see what a futuristic city would be, like the landscape of a city on another planet.
KHANNA: You know, it's interesting to hear you talk about cosmopolitan and the future, because so many musicians when they are trying to conjure such a landscape will revert to synthetic music of some kind, and it's fascinating to hear you talk about this by using rather traditional instruments, if you will . . . it's fascinating to me that the future for you, in your mind, is really connected to the past, I suppose. This future landscape is really anchored in these older instruments, I suppose, in your case.
SHIPP: Well, I think the traditional jazz trio can present a vision of the future just as easy as a synthesizer does. I mean, the future is not all technology. The future is also inner landscapes. I mean, being able to travel inside your mind, or if you want to holographically go inside your mind, you can go to the whole universe . . . with Sun Ra, despite the fact that he has used electronic instruments, and was one of the first to use a Moog synthesizer, and that's a part of his vision, that he actually also understands that acoustic instruments can give a tip to futuristic ideas and landscapes just as much as a synthesizer can. I mean, first of all, a scientist does equations with mathematics, so you know, you can calculate stuff on Pluto in an equation, and scientists were doing that before computers. Obviously computers help mathematics in doing equations that are so cumbersome, you know, but scientists were doing that way before they were doing things on computers.Yeah, I don't sit around thinking about that, but that has been part of the calculation, that I can generate something with a scale or a cluster of notes on the piano that has everything, as much, to do with walking down the street on Planet X than what technology would generate.

SHIPP: [on the song "Microwave"] I actually named that more, I was reading just some physics books I was looking at around that time... it has nothing to do with an actual microwave that you cook in.
KHANNA: You're a physics buff, are you?
SHIPP: I find modern physics to be really good for the imagination . . . It's not a matter of really having an understanding of it. In fact, it's more of a matter of not understanding it, and letting your imagination go somewhere.

KHANNA: I feel like because we live in such dire times in terms of climate change and various administrations around the world, I feel like there's a deeper and more prolonged fascination with this notion of living in space.
SHIPP: Right.
KHANNA: Leaving earth! [Both laugh] Are you someone who is contemplating such things?
SHIPP: Well, we're kinda stuck here! Until we really get out, so... let's just say I always contemplate travelling to higher planes. That doesn't necessarily mean physically moving. It means just trying to get in touch with yourself, and find that bedrock of a place that might energetically, as far as frequency-wise, not be Planet Earth, even though your body's on the Planet Earth at the time.
KHANNA: I don't mean to conjure any kind of cliche, but does music take you to a different place?
SHIPP: (Emphatically) Yes.
Posted by Larry at 9:45 AM