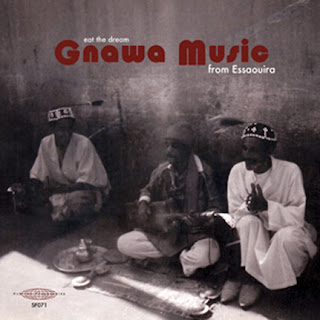 Sublime Frequencies is such a rich record label that I'm still wrapping my head around LPs that they released almost 10 years ago, such as the Algerian Rai LP just re-reviewed back in July, and this Eat the Dream: Gnawa Music from Essaouira LP which, from 2012, is no spring chicken itself. This is essentially (in true SubFreq fashion) a barely credited Maleem Mahmoud Guinia LP (though producer/engineer Tucker Martine does prominently include two of his own very cool extended field recording interludes), and as such may be the single best one I know of. Just Guinia hollering and jamming out on that guimbri with his percussion/chant crew, very well-recorded by Martine in 1994, when he travelled to Morocco and ended up in the house of Maleem Boubker Guinia, the father of Maleem Mahmoud, and another son Maleem Abdallah Guinia, who plays the guimbri solo that opens the record. To clarify, Maleem is an honorific meaning "master," in this case a master of the 300-year tradition of gnawa music, and I would say Mahmoud Guinia (b. 1951) is to gnawa music what Marley (b. 1945) is to reggae and Brown (b. 1933) is to funk, that is the leading 20th Century innovator/interpreter.

And good gawd, hit me, look at what's been just sitting there on the internet for over 3 years, Maleem Mahmoud Guinia a year before his death, sharing a big couch in a Moroccan palace with three percussionist/vocalists, jamming as hard as possible for an hour: