xNOBARBEQUEx Sunshine Of Your LP (SILTBREEZE) 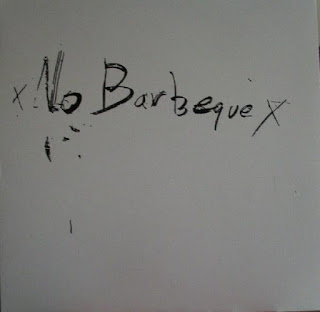 Of all the lo-fi LPs (and cassettes and CDRs) that were released in the mid-late 2000s shitgaze boomlet (that's right, "shitgaze boomlet"), not all of 'em are gonna hold up that great. One might think a 2007 instrumental LP (recorded in 2005) of a guitarist and a drummer crudely hitting single atonal notes on their instruments, sometimes slowly and ploddingly, other times fast and ploddingly, and not infrequently just making a complete arhythmic mess, would not be one of them to stand the test of time. But by god I really liked this album the first time I heard it, and played it a bunch, and now it's been about 10 years (!!!) since I've listened, but have gotten it back out for a couple more spins, and have to say it sounds just as good as ever. Dare I say it's my favorite Siltbreeze 'phase two' release? Somehow, at least, the one I've listened to the most? Regardless of the utter crudity of what these goofballs play (and it's pretty damn crude at best), the shadowy lonesome atmosphere is exquisite throughout, as is the commitment to the rawest of No Wave principles. The name of this guitar/drums duo is pronounced "ex no barbeque ex," they're from Brisbane, Australia, and the guitarist is Matthew Earle, who runs the label called Breakdance the Dawn, and has played in quite a few ad hoc-ish bands down there, like Girls Girls Girls, and Xwave. I also own LPs by both (blame the Little Big Chief), but I've yet to find another one of his that's as.... singular as XNoBarbequeX. (By the way, everyone online says the album is called Sunshine Of Your Love, but I can't find the word "Love" anywhere on the sleeve or insert, so I'm calling it Sunshine Of Your.)

POSTSCRIPT: Pulled out the aforementioned Xwave LP, entitled Cities on Flame, and have to say that its dark guitar and distant vocal tunneling was sounding pretty damn good this forlorn late winter Sunday afternoon.
Posted by Larry at 1:04 PM