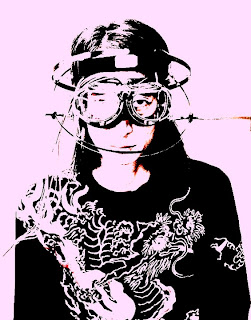 The new solo album by Ghost frontman Masaki Batoh, to be released February 28th on Drag City, contains music that he played with his brain. The Brain Pulse Music Machine, which apparently will also be available from Drag City (street date TBA), comes with a head unit that reads your brain's alpha and theta waves and then transmits them via radio waves to a motherboard... but I listened to the album before reading the press release, so I didn't know any of this, and the album sounded like excellent and extremely austere and forbidding ancient-style ceremonial Japanese ritual music, not unlike stuff that would pop up on Ghost albums here and there in between those elegant nouveau psychedelic rockers that Batoh usually specializes in, as one of, in my opinion, the great and defining lead singers of the psychedelic 1990s. I also learned from the press release that Batoh was going to make the album entirely out of brain pulse music, but just before recording sessions were to begin, the Great East Japan Earthquake of 2011 happened, and he decided to add in the ancient acoustic ritual music element as the kind of prayer/dedication/offering to the gods that people of Japan would (pre)historically perform in the face of disaster. In my opinion, this element is what the album is all about, with the brainwaves taking a back seat, although the album does open with a piercing sustained tone cluster that sounds like an ancient woodwind instrument blending with a high-pitched brain tone, and works as a great cry of lamentation, and a call to attention for the grim ritual to follow. Then again, steadily beating on a drum with your hand is a type of brain pulse too. But like I said, I listened to it a couple times before I knew any of the back story, and what it made me think of the most were similarities between ancient Japanese music and ancient American Indian music and how it might just have something to do with that Bering Strait land bridge of 15,000 years ago. So there's a lot of layers of allusion here.

Once you've got a clutch of King Tubby & Lee Perry records and wanna keep going, you might check out Garvey's Ghost, the dub version of the Burning Spear album Marcus Garvey. Leadoff track "The Ghost" is pretty great, but it's a very low-key album, less arresting than the shattered Tubby or Scratch style you might be into, more in a relatively untreated mellow roots instrumental style. In fact, if you're only gonna get one of the two I'd recommend the vocal set Marcus Garvey, because if I'm gonna check out a Burning Spear album, I wanna hear the man sing!

The official soundtrack to the film Drive is probably the best new fake 1980s pop music I've heard besides Channel Pressure by Ford & Lopatin. Normally I dislike new fake 1980s pop almost as much as I dislike new fake Italian giallo soundtracks, but both of these records have hit a hitherto unknown sweet spot, the kind of feat that can only happen if the songwriting is good (like the way Ford & Lopatin somehow endlessly extrapolate and improve on the Pointer Sisters' "Automatic"), though that hardly seems the case when considering this soundtrack's execrable-but-somehow-wonderful "A Real Hero" by College (feat. Electric Youth). Can you really call that good songwriting? I guess it turns out you can, but really, I think the reason this music is so good is simply because magic is involved, something beyond mortal understanding. Even the artists responsible for these creations don't understand, and never will. Good weird flick too, if you haven't seen it. Caveat: the pop portion of this soundtrack that I was just raving about is just 5 tracks at around 20 minutes. You've got French vocoder jam "Nightcall" by Kavinsky & Lovefoxxx, the stunning pop obsession of "Under Your Spell" by Desire (which I now see is a new band including Johnny Jewel of Glass Candy), some sort of cabaret/torch song which I'm not that into, and a killer Basic Channel-worthy minimalist jam by The Chromatics, which is another Johnny Jewel project, who I guess is the producer, or "developer" of the pop portion of the soundtrack. He also wrote a score for the whole movie, but it didn't get used. Instead, the film was scored by Cliff Martinez, maybe because he's more of an L.A. veteran. (After all, he played drums on the last Captain Beefheart album in '82 and the first two Red Hot Chili Peppers albums in '84-'85!) His ambient cityscapes are nice, but they go on for 50 minutes and, without being able to support the film, eventually fade into irrelevance.


I thought Flipper's "In The Garden" was maybe, just maybe, still the Van Der Graaf Generator album. I confess that about two minutes in I still wasn't 100% sure that it was a different album, and had to look at the iPod screen to find out. I know that sounds nuts.
Posted by Larry at 10:33 AM

My name is Olivié and this boring comment is about a project called Amour&Discipline.

A&D is a DIY non-profit collective. We're doing a website that will allow people to send free donations to ANY indie musician/label. It will also include a collective webzine, and
I'd like you to contribute to it because, well, you have great taste and you know how to write, hehe.

Our goal is to champion culture sharing AND to provide an alternative way to support indie artists.

You can read our manifesto on http://amour-discipline.org.

Life is short, but our full manifesto is endless, so you can also read a shorter version there.

Don't hesitate to ask me any question.

hey henry, did you have the time to check our manifesto ?

i really have to sleep...

It's okay, you can call me Hank!

Just read your manifesto and it's a very thoughtful and well-written approach to a difficult issue. Lots of excellent insights, like the difference between stealing and copying, and between for-profit sales goods and non-commercial gifts. Maybe some positive legal precedence will be made on these differences in the courts... that'd be good, right? Anyway, great job so far and I'm excited to see where it goes.

Thanks for the delay, some issues kept me away from the computer this week end.

Thanks a lot for your comment. As i told you, i'd be very happy if you wanted to contribute to a&d collective webzine.
You can contact me here : webzine@amour-discipline.org

I thought it was funny that the chorus of that "Drive" song is something about "a real human being, and a real hero" when Ryan Gosling's character is neither.