JOURNEY TO THE CENTER OF THE ON-DECK PILE 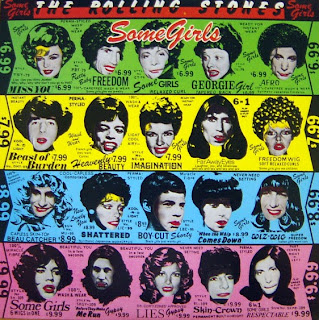 Started out this last Sunday afternoon with an unintentional Dad-rock theme, during which I realized a few things, that I like Side 2 of Some Girls better than Side 1, that "Before They Make Me Run" is the best Rolling Stones song that Keith Richards sings (I guess I had it as "Happy" before), and that "Beast of Burden" was the closest they ever got to Keith's perennial dream of playing reggae, which is to say not very close (Charlie Watts infamously never could figure out how to play the reggae backbeat), but it's there in the gentle melancholy melodic weave of the Richards and Wood rhythm guitar section. I also realized, after being in denial for over 30 years, that Mick Jagger really does start the song by singing "I'll never be your BUH-NEAST of burden." Finally, on "Shattered," I realized that even though this 1978 album is their "answer to punk," there was no way they were a punk band in 1978. Maybe for a few weeks in 1963, but that's another essay. What they were on "Shattered" was a killer new wave band. The groove is incredible, and Jagger's ad-libbing at the end is genius, which is why you just can't write Jagger off. No matter how much he annoys you, he's always turning around and doing another one of those ad libs, or playing killer rhythm guitar on "Sway," or that glorious doot-doo falsetto hook on "Waiting on a Friend," or the blown-out harmonica solo on "Gimme Shelter," or the majestic melodies of "Moonlight Mile," or . . . there's a lot more.

I've already raved about Dylan's New Morning before in this very webzine, some sort of utterly soulful allusive metaphorical rollicking piano-driven gospel trip, especially "Day of the Locusts," "Sign in the Window," "The Man In Me"...... by this time I was making dinner for the kids, so I had to keep the dad rock going. I dug deep into the pile, every record seemingly some sort of bizarre electronic annoyance to the nuclear family and, passing on some recent Baltimore weirdness by Salamander Wool and a self-described "black metal" album by Nocht the Only Ghouls, got to my trusty Greatest Hits LP by Bill Monroe. I played this one a couple weeks ago because my son is studying the American Southeast in school, and his 3rd Grade Social Studies textbook contained a whole page about Monroe as the father of American bluegrass music, and my thrift-scored LP is autographed "Best Wishes, Bill Monroe" which the young dude found fascinating even though we're both about 99.5% sure the signature isn't authentic. Such beautiful bluegrass music, and Proto Dad Rock!

Next, needing something equally non-agitating but maybe less patriarchal, I dug even deeper and pulled out one of the new Grouper A I A albums. I never have any idea which of the two is which, but this ended up being the one that has "Dragging the Streets" on it, or the suite of connected songs that makes up Side A and includes "Dragging the Streets," and all of them sound literally like dragging the streets, but not in the Godflesh Streetcleaner sense, more like a huge healing angelic weight that is slowly pushing all the garbage into the abyss at the edge of town. It actually does make me think of certain Melvins compositions, the way it seems to be constantly hovering endlessly on a very heavy chord, then seemingly always resolving it by rising upwards, like answering a question with another question. But, however Melvins-influenced this album may or may not be, it is not dad-rock. Grouper makes a full-on Earth Mother sound, and please leave any hippie prejudice you may have towards a statement like that behind you, because this is bigger, the sound of the heavens hovering, holding great grey clouds of heavy water. I mean that seriously, which is why I put both of her albums on my year-end list, and why I played this one twice in a row tonight. (And yeah, I guess "Heavy Water" is the name of one of her songs, from her previous album. I must've done that on purpose.) 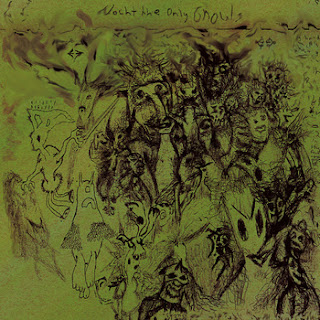 After the kids go to bed it's safe to put on this aforementioned allegedly "black metal" Nocht the Only Ghouls record. It was sent to me with an unsigned note addressed to "Blastitude, Larry" which read, in part, "I consider the album to be black metal, but you write the reviews." Well, I don't think I would've thought "black metal." I probably would've thought "folk" and "noise," but don't worry Ghouls, good folk music is 100 times heavier than good black metal (and really good black metal is folk music, but I digress). I mean, it's not a complete stretch to call this black metal, because the music is certainly grim and lonely, but it's mostly very quiet, and not obviously evil in intent (no obvious flatted seconds and fifths, no 'unhuman' screamed/growled/hissed vocals, possibly no vocals at all). Possibly a one-man band (oh, it says right here on the back cover that it's two), no apparent drum kit, lots of acoustic guitar... I don't think electric guitar makes an appearance until the second side. It's not grim like black metal, but it is quite grim, more like one of those austere "jagged acoustic guitars and Kevin Drumm" style jams by Gastr del Sol. And that's good, because I'd much rather listen to Gastr Del Sol on a regular basis than almost all of the "true" black metal copy-cats I've heard this last decade-plus. This Nocht the Only Ghouls record is pretty good too. The name of the label is pronounced "weird word" but spelled Vwyrd Wurd. Here's their facebook and their bandcamp. 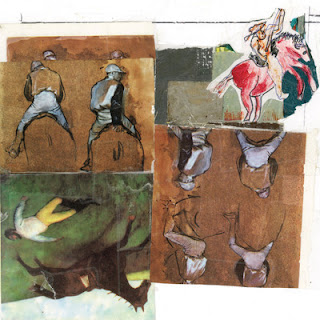 Alright, what else in the pile is brand new and not advisable for cranking around elementary school kids?  Ah, the new FNU Ronnies! Perfect! They were the weirdest of weird punk bands back during The Year Weird Punk Broke* and it was probably because no one else was willing or able to compete! I think they were a Philly band, and are now split between Philly and San Francisco, which is one of the (seemingly many) reasons why they haven't released very many records. Well in 2012 they sound weirder than ever, and I feel like the overall flow of this 24-minute EP on the Load label will require multiple listens for me to even begin to understand as music. I mean, they do sound like a band -- I hear the pounding punk rhythms and driving guitar, and things that are probably vocals. Just now I heard an actual singer chanting the actual title of the album, "Saddle Up," in what I just realized is a killer driving punk song. I mean, I know they're a hard-driving sick-cyborg punk band, but there's still confusion around every corner. Can't even tell yet if the confusion is coming from the post-production or from the songwriting itself. I think it might be the latter. Either way, definitely recommended.