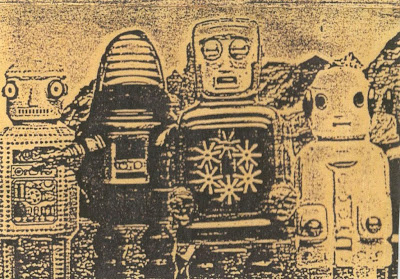 At first I thought it was another nondescript underground paste-on CDR noise label, but upon closer inspection of the xeroxed pasted-on artwork (and a clarifying e-mail from the label CEO) it became apparent that EEEEEEEE (that's 8 capital E's to be EEEEEEEExact) is a reissue label, digging up obscure cassette-only underground stuff from the 1980s and giving it a new strange life.

First disc I put in was by Exploding Head Trick, described as a Rock In Opposition band from Minneapolis, extant from roughly 1986 to 1993... now there's an undocumented slice of musical history. I've never really understood R.I.O... I've barely even listened to Henry Cow... I've never even read the R.I.O. wikipedia page. You might even say that I've always been in opposition to Rock In Opposition, which may be why Exploding Head Trick sometimes sounds to me less a part of an important lineage in Progressive Rock History, and more like they're in some sort of "all about science" musical that my kids might go to. It's mostly in the earnest vocal melodies sung by the main guy, but also the incredibly perky 1980s instrumentation (guitar, bass, drums, keyboard, and prog violin by the main lady, who also sings some nice Cocteau Twins style arias here and there). That said, the instrumental musical interplay can get surprisingly complex and even excitingly raw. I've listened to it three times already so it's certainly not terrible... but I still don't understand Rock In Opposition.

Next on the stereo was Face In The Crowd and a reish of their 1985 cassette Sax And Drums And Rock And Roll, which the EEEEEEEE website promotes as part of the UK DIY movement, but I don't know.... just because it's post-punk and a British band is doing it (itself) doesn't automatically mean the music is essential listening. Other than weirder saxophone and some dirgier songs, this kind of sounds like a run-of-the-mill angry pub rock band to me. And maybe that suits them fine, except the "run-of-the-mill" part. I think it's a recording of a gig, kind of a boomy audience recording quality... again, not bad, cool artwork too (pictured at the top), and it does keep the label roster unpredictable, but it's probably my least favorite of the bunch. See for yourself, the whole album is available for download via the label website.

Actually, at least part of me would say that the most ambitious EEEEEEEE release, the Girls On Fire 5-disc anthology Girls Who Grew Up To Be Arts Administrators, The GOF Story Vol. 1-5 is my least favorite, which is funny because the label CEO thought that it "may be the most Blastitudinous" of his releases. Why do people think I only like the weirdest stuff? Hmm, maybe it's because I've been posting reviews of really weird music on the internet for almost a decade... either way I would definitely call it the hardest to listen to in its entirety, and not just because it's 5 discs. Girls On Fire is the work of Leslie Singer, who was a founding member of DC band Psychodrama and later decamped to San Francisco where she recorded and released five cassettes of her varied rants, over guitar tweak-out (I Think About Jackson Pollock), intricate and relentless drum machine terror (In My Blood), outright sheets of noise (Confessions Of A Shit Addict), and more (the other two discs I haven't listened to yet). Those descriptions might make it sound more listenable than it may actually be, as the ranting is pretty constant and the music rarely gets to breathe on its own, but with five long and involved releases that came out from 1983 to 1985, the Girls On Film oeuvre is no slouch in the history of solo power electronics. 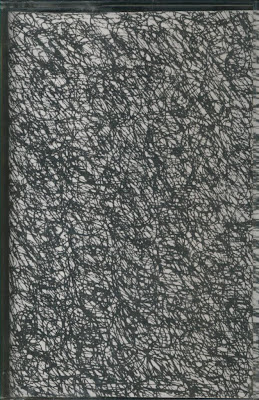 As for my FAVORITE of the EEEEEEEE bunch, it's gotta be the album by Harry Zantey, hardcore industrial solo EMS synth,"recorded live, one take, no overdubs," and released waaaay back in 1981 in Australia. He was a member of the original Sydney-based 1970s lineup of Crime and the City Solution, but this is a lot heavier, scorching and dark stuff.

And my second favorite has gotta be the 1986 cassette by Sons of Bitches. Synth industrial nerd weirdness from Providence, Rhode Island. You can't help mentioning Ralph Records when describing this because of the synth sounds and sardonic approach, and these guys are vocally and textually even dorkier than the Residents. Thing is, they do it in a very musically interesting way. The vocals are not of central importance, and they know the secret of good synth/industrial/noise music; that it must not only contain the sound, but be aware of the silence on the other side of it. There is a novelty pop feel that may be too much for some, with totally silly keyboard tones plinking away while a guy named Oblivion David Stomach grumbles in a joke grumpy voice about syphilis and other stuff, but it's a surprisingly varied album, with a lot of extended instrumental forays, so stick with it. It also made me think of The Terrifying Sickos... first time a record has done THAT in, well, ever. (Probably because I read about them earlier today in a Hattiesburg, MS scene report WFMU blog post by DJ Brian Turner.)

Anyway, get in touch at http://EEEEplusEEEE.bravehost.com if you'd like to check this stuff out.

OTHER HITS OF TODAY:
RICHARD YOUNGS Beyond The Valley Of The Ultrahits (SONIC OYSTER)
HAIR POLICE Strict 7" (TROUBLEMAN UNLIMITED)
MICHAEL MAYER Immer (KOMPAKT)
KEITH JARRETT Dmitri Shostakovich: 24 Preludes & Fugues op. 87 (ECM)
EDDY CURRENT SUPPRESSION RING Primary Colours (AARGHT!/GONER)
CONQUEROR Hammer of Antichrist (FIFTH DIVISION)
JUAVVES "Muy Aburrido"  ("Sounds Like: if you were to like smoke weed then go surf and like while you're on top of a sick wavve you were to take a sick bong rip and smoke more weed.")
Posted by Larry at 11:01 AM