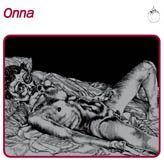 Attention, fans of the Onna 7" that came out on Holy Mountain this year, you may very well want this CD edition too. Not only does it look great in an LP-style gatefold sleeve, it comes with extensive autobiographical liner notes by Onna main-man Keizo Miyanish, repros of some of his unsettling manga artwork, as well as old flyers and live photos and, most importantly of course, over an hour's worth of quality bonus tracks. The two tracks from the 7" are first, sounding just as addictive, ethereal, and punk/new wave/psychedelic as they do on vinyl. I really can't believe how entrancing these songs are... I love the way the second one, though clearly a different song, still seems to be an extension/variation of the first one, and when Miyanish or whoever/whatever does that bird-call at the end of it I always get incredibly stoked. Track 3 is an outtake from the same sessions, and it has the same guitar/drumbox instrumentation and the same haunted eerie near-childlike vocals, but with a notably faster tempo. For the next two tracks we jump ahead 24 years to 2007, and they don't necessarily sound more contemporary than any other Onna material, but still make left turns; the first sounds like a more traditional and PSF-friendly take on jammy outsider rock, the second has an odd blues strut to it, and both have vocals in a less hypnotized/haunted/waved style than the 7". The next four tracks are from a live performance in 1983, the same year as the 7" material, and will be of particular interest to many, as Miyanish is joined in a duo by Michio Kurihara, the brilliant guitarist who went on to the better known bands Ghost and White Heaven. When the 7" came out a couple months ago, it had no personnel credits, and it was easy to imagine that the swooping, surging, and sometimes gently melodic guitar playing on the record was indeed Kurihara -- in the liner notes, Miyanish himself writes "Even now I can still feel his guitar soar within me" -- but the CD has credits, which reveal that guitarist as one Hiroki Mafuyu. With Kurihara, the band sounds surprisingly starker and sparser, like gagaku on Mars (the band, not the planet), just two guitars and voice playing skeletal spooked ritualistic songs, the last one a good 15 minutes long. The disc is rounded out by one more, described as "a solo piece from an obscure cassette release," with no year given. It's another long piece in which Miyanish hammers away on his guitar and sings, again with an ancient ritualistic feel that contrasts the sleek machine trance of the 7". Either way, I can't stop listening to the whole thing... I suggest that instead of going out for dinner tonight, you give that $20 to Holy Mountain instead, it'll get both the 7" and the CD shipped to you postpaid.. 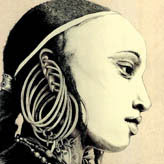 Even in these days of the boutique CDR and cassette release, in which all artists can easily release page after page after sketchbook page, Blues Control seem to be operating on the tried-and-true 'one full length per year at most' plan. And this, their brand new album and fairly long-awaited Siltbreeze Records debut Local Flavor (release date July 9), only clocks in at under 35 minutes, but believe me, it's quality over quantity all the way. In what is something of a Blues Control tradition, the album starts with upbeat cheese rock that quickly reveals an escape hatch into other dimensions, here tripped open by a sharp mid-song horn chart, played by none other than Kurt Vile (on trumpet, apparently he didn't dump it) and Jesse Trbovich (Vile's bandmate in the Violators, on sax). These two stick around for the next track "Rest on Water," which indeed sets us all the way down onto deep tranquil seas for 6 minutes that seem like 12 and are still over way too soon... Vile switches to acoustic guitar and Trbovich plays sweet sax that gently ponders a page out of a hymnal from the Church of Anthrax. Track three "Tangier" turns the motor back on and continues the deep travel trance, this time for a full 8 minutes, which brings us closer to the true submersion demanded by side two, a side-long 16-minute prog suite called "On Through The Night." The more I listen to it, I still can't believe how it moves from giant chromium butterfly wings gently flapping back and forth in deep space into laid-back deserter-orc hip-hop instrumentalism into what sounds like the Cale & Riley tune again, except grand finale style, with an entire imaginary orchestra gently joining in. The whole record is really something, light and pleasant on the surface, deep and rich underneath, and I can't stop listening to this one either. 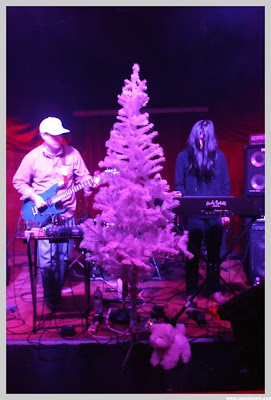 TWITTERVIEW WITH @BLUESCONTROL
by @fingered, re-edited from 6/13/09 live feed
reprinted with permission

F: Where are you now?

BC: Just crossed the Occoquan River, south of DC. Where are you?

F: I'm in Bushwick, Brooklyn. I have to go feed @excepter cats then off to a BBQ before your gig. JFR+lala fled puerto rican parade madness. Hopefully @SSPS will be there tonight though.

BC: Didn't realize today is the parade. We got some good recordings of it 2 years ago. We're playing with @SSPS at Cinders August 1

F: Parade is actually tomorrow, so traffic shouldn't be too F'd up for you. Did you guys meet in NYC? How long have you been doing BC?

BC: Bedford is closed though, right? And the L train is down? Yeah, we met in NYC through a mutual friend. We were roommates 1st.. played our 1st BC show January '06 at the old Lucky Cat.

F: Your live set is a truly mesmerizing and beautiful experience. Who/what are your influences?

BC: Thanks! We are influenced by David Copperfield... and ZZ Top.

BC: Haha..! The only show we've been to in Richmond since moving was ZZ Top. 1st time I realized I was living down south though.

BC: They played at Snagajob Pavilion...

F: You guys must be getting close to the NJ trnpke yeah? Or still in MD? Gonna run and feed cats. What do y'all eat on the road? Waffle House: yay or nay?

BC: Have fun at the BBQ! We made a pit-stop, so we're just north of Baltimore. I 8 a PB&J, and Lea 8 a bag of grapefruit. OU812. Waffle House is the 2nd-to-last resort, just above McDonald's. But I like 'em scattered, smothered, and covered.

F: Nice. So a few more Brooklyn/East Coast gigs this summer then a few dates in Europe, London/Berlin- you play there before?

BC: We played in Belgium & the Netherlands last year, but nowhere else in Europe. Doing a month-long tour there with Tropa Macaca. That's in September. Then we're touring around the US in October & November.

F: And tonight you play with Kurt Vile who you've played with a number of times and who else?

BC: Kurt & the Violators, Woods, Grooms, and Pygmy Shrews. You checking anything else out tonight? Did u go to the fest last night?

F: Just rocking the Shank tonite. Caught These Are Powers yesterday - those kids are touring China in July!!