The Brooklyn-based Sacred Bones label sent along a package of four new 7" records. This imprint has a serious and classy design aesthetic going... even the envelope they came in is beautiful and I'm sorry I tore it open right across the label logo because I hadn't yet realized it was a specially printed envelope. The tunes, on the other hand, have given me some mixed feelings: 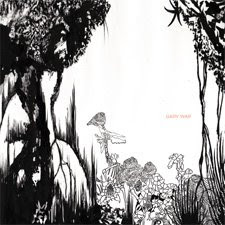 GARY WAR Zontag 7". Here's a band/artist/guy from NYC that I had pegged as a more ethereal and prettified take on the Blank Dogs aesthetic, perhaps the Haircut One Hundred to Blank Dogs' Depeche Mode. That might not make any sense at all because I've never listened to Haircut One Hundred, except for that video where the guy played a xylophone with a couple bananas. And I like Gary War better than Haircut One Hundred (and the Blank Dogs for that matter) -- their full-length LP New Raytheonport, out earlier in 2008 on the Shdwply and Disaro labels, was an elusive and dreamy thing of no small beauty. This 7" on the other hand is kind of a goof. I mean Side A almost makes no sense at all. Side B a little more, but both are somewhat hyper and upbeat almost-songs that immediately run away from the listener, stay there for a couple minutes, and then disappear. It is more 'punk' than the full-length, for what it's worth. 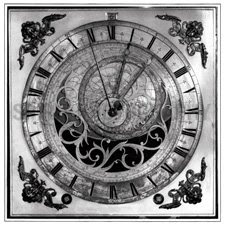 SPIRIT PHOTOGRAPHY Time Is Racing 7". A band I know nothing about, but sounds like more Blankdogstitude to me, though with more direct vocals, a heavy and pounding drum machine, full-on guitars... the stadium rock version of the Blank Dogs' hiding-in-the-cupboard emanations. The vocals might be too much, taking it straight past Depeche Mode and into the realms of Wang Chung and The Fixx themselves. (Oh wait, the Sacred Bones website says "Douglas P and early DIJ" because they would never say "Wang Chung and The Fixx.") In other words, the music is heavy enough but this is slightly corny overall and I'm starting to wonder just what is the power of this 1980s aesthetic... it seems to have such a huge influence, with Spirit Photography hewing close to the party line while Gary War seems to be kinda frantically running away from it, stealing glances over his shoulder the whole way... 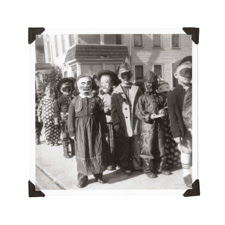 THE PINK NOISE: Gold Light 7". I'll be damned -- more straight-up blankdoggery! Three for three, so I think I can officially announce that Sacred Bones has an aesthetic and they're not afraid to mine it. And I realize it's not accurate to just say "sounds like Blank Dogs" about these records; it's more like a few people decided it would be fun to start a band (or project) that sounds like Joy Division and/or 80s synth pop, and they were in such a hurry to try out their gear and get recording that they just didn't have much time to work on any songs. That said, "Gold Light" does have some hooks, a catchy beat, a "bop bop" that the singer hits in between the verses, and some out-of-nowhere hand drumming. Side B has a driving heavy beat, a station-ID toy-keyboard chime-hook (better when Blues Control did it a couple years ago), and... that's really it. Both songs seem to be right at about 2 minutes long. Right now the critspeak popping into my head for this 7" is "rather slight"... but I guess that is how 45s were back in the day, before these days of 33 RPM EPs and whatnot, and "Gold Light" would sound fine for a couple minutes on the jukebox at some dive bar in the sci-fi movie in your head, sure. 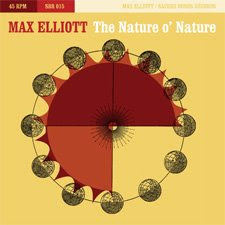 MAX ELLIOTT The Nature o' Nature 7". I saved Max Elliott for last because I had a feeling he would be different... he's recording under his own name, for one... he's also got 3 songs on his 7" instead of 2... and sure enough, he's just a guy with an acoustic guitar singing and playing some folk songs. No drum machines or 1980s keyboards in sight -- not even imitation Ian Curtis vocals! Just a couple minutes in and I like this record the best of all four of 'em. Yes, because it comes as a relief after three records in a row that choose style over substance, but also because his songs are distinctive, taking a kind of old-time ballad feel and stoking it with a little punk fire. Some of the voice breaking on Side B is about halfway to Simon Finn doing "Jerusalem," which is quite a bit farther than most. Anyway, turns out he's from Wisconsin and part of the Dead Luke/Jerkwave crew... he's a member of the Absinthe Minds band and, if I'm reading this article right, he is Zola Jesus's brother.

Update: the Gary War is getting a little better each time I play it, while the Spirit Photography and Pink Noise are actually slipping a little. The Max Elliott is staying the same because it was straight-up to begin with.

Three more 7-inches have come from Sacred Bones, right on the heels of four 7's a couple months ago. Even though last time I wasn't as impressed by the tunes as the overall presentation, bring 'em on I say.... 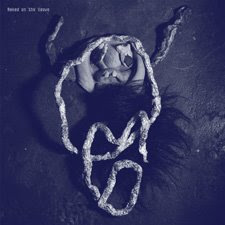 ...and in fact, the first one is a winner. Naked on the Vague is an atmospheric avant-punk male/female synth/drumbox/guitar/vocals duo from Australia, and one of the few Sacred Bones bands I've heard before, thanks to their 2008 full-length on Siltbreeze. I wanted to like that one, and I tried several times, but it just never stuck with me, the old "one ear/other" syndrome. This new 7" on the other hand sticks pretty hard. Side A "Chitty Chat" is a short pounding and arresting rave-up, while Side B "Goodbye Dear Cliche" slows it down and zones it out like something that might've been on Siltbreeze in the 1990s instead of the 2000s, and may have even been called "haunting space rock" in an actual paper zine. 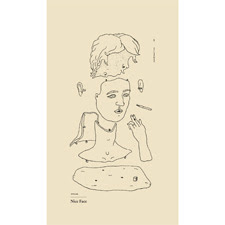 Nice Face's A side here struck me on first listen as yet more inexplicable cheese-intentional synth-wave worship; dance-punky 80s stuff that could almost pass for Ethyl Meatplow or something. Side B, however, is a guitar-heavier hard-driving punk tune that picks things up a good amount, thanks mostly to some truly ripping guitar solos. Still not quite enough to save this one though... 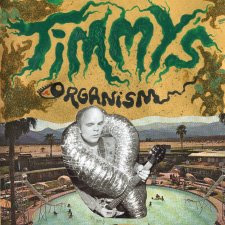 And last but quite the opposite of least, a double 7" in a sweet gatefold sleeve. It's by Timmy's Organism, which is solo recordings by Timmy Vulgar, the lead singer of Detroit cult avant-garage punk band Human Eye. Because of the eccentric wildness of Vulgar's main band, I figured this stuff would surely stand out from the 2000's Blankwash, but to be honest, at first it didn't. It still sounded like one guy in a bedroom with electronic equipment singing in a deep voice kinda like Ian Curtis. However, I think I had just gotten my ears blanked out from listening to all these Sacred Bones records in a row, because on a couple more listens it starts nosing above the pack. Vulgar's got a real singing voice and he writes real lyrics... the distortion on his guitars and bass or whatever is way over the top, nothing timid about it... and all of these records use 'sci-fi' sounds, but Vulgar uses ABSURD sci-fi sounds, the aforementioned over-the-top distortion, constant electro/synth whooshes and whistles that sound genuinely extraterrestrial... his guitar solos sound like space opera laser battles. Anyway, there's five tracks on these two records, and they're all real songs... still not reinventing the wheel but it's a fun listen and the final track "No Hassle" is an excellent driving zone-out rave-up.

And thus, I can recommend 4 of these 7 records. So, despite having the best uniforms in the league, the season has been a little disappointing for Sacred Bones so far. But they shouldn't get too down on themselves; they're still above .500, and with a full schedule still ahead, they might still make the playoffs...

you just blank dogged yourself by using blank dogs as a reference point. now i can't even hear/see the words blank and dog without thinking of that band. it's like the 2009 version of OBEY.

I know, I had a similar problem in the 80s with the words "dogs" and "d'amour"