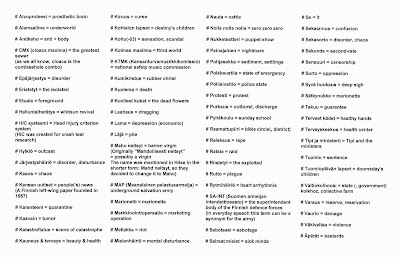 Next time you give Killed By Finnish Hardcore a spin, this band-name translation guide might come in handy (click on the image for a proper view)... nabbed from the Legacy Document blog (see also: Cosmic Hearse) which got it from the Saapasnahkatorni blog...

**************
I just realized that a little bit of Robert Wyatt shows up somewhere during the Radio Palestine CD on Sublime Frequencies... from Rock Bottom, no less! Kudos to that enterprising Palestinian DJ, and to Alan Bishop for picking up his/her signal, which hopefully hasn't since been bombed into rubble...

*******************
Oh man, why am I watching Tommy Bolin youtubes tonight? He grew up just 100 miles or so north of where I grew up, so he was always kind of a local hero back there in the Missouri Valley. I remember hanging out in his hometown of Sioux City, Iowa in the late 1980s and seeing posters of him up at bars... yep, feeling the history... wonder if they're still up... his brief career as a journeyman big-leagues rock guitarist may have been something for ole Sewer City but it really wasn't too much to brag about... he died of a multiple drug overdose at 25 and before that his biggest claim to fame was being the second or third replacement guitarist for over-the-hill bands like James Gang and Deep Purple. Of course, there was definitely potential for more... he was a surprisingly balls-out fusion guitarist, as can be heard on Mahavishnu Orchestra drummer Billy Cobham's 1973 solo album Spectrum... unlike John McLaughlin, he wasn't the kind of over-the-top player that could compete with (let alone subdue) the endless wankery of keyboardist Jan Hammer, so the album is no Inner Mounting Flame, but it's still pretty wild. And then there's his biggest solo hit, a song you may have heard as a 'deep cut' on classic rock radio, an unfocused but kinda awesome 9-minute stone groover/fusion fantasia/cautionary tale called "Post Toastee," as in "Don't let your mind post toastee/Like a lot of my friends did." He didn't practice what he preached, but then again maybe he wasn't exactly sure what it meant either.

Here he is not really helping Deep Purple very much... and they do kinda need some help:

He seems to have been better with James Gang, this is at least kinda insane:

(but he can't hold a candle to Walsh):

And this is kinda rad, a 1975 clip from a late-night Denver-area show called Rock Talk. Bolin is in Deep Purple at the time and already pretty post toastee, but he seems like a nice dude and handles himself pretty well. Get a load of the other guy on the panel, the one who seems to have walked out of a Will Ferrell movie... I'm talking about the mustache dude who not only is a FLAUTIST, he's the flautist for DAN FOGELBERG.... 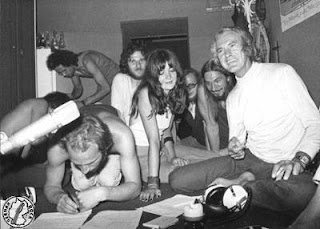 Seems like Seven Up, the crazed Ash Ra Tempel album they cut with special guest lead singer and fugitive prisoner Timothy Leary (you can read more of the story in Julian Cope's Krautrocksampler or this excellent article), doesn't get raved about quite as much as their other early masterpieces. Maybe no one can get past the creepy factor of Leary coming on like a Mick Jagger wanna-be on Side One, but the band is great, consistently laying down amazing pre-Hawkwind spiked-pint acid pub insanity. I mean of course the cringe factor is there, particularly the rather gropy song "Right Hand Lover," in which Tim is all "I'm a right hand lover/I got a hinge on my thumb/I'll manipulate you baby" -- okay I'll stop. But even if you can't hang with Side One, pull it back out and put on Side Two, a single extended performance of one of the most dazed and zoned ballads in psych rock history, a 20-minute take of their key song "Suche & Liebe" (there's a slightly shorter and also great version on the Schwingungen album). The moment halfway through when Leary's beatific mutterings, buried in echo, suddenly become crystal clear as he intones the phrase "You're so beautiful" in an awestruck whisper... well, it's really a MOMENT, you know?

************************
And as long as we're talking about this sort of thing, I thought I'd throw this in here JUST FOR MEDICINAL POSTERITY, straight from The Alice B. Toklas Cookbook as submitted by Brion Gysin (I haven't made it myself and I'm pretty sure I never will, I don't keep enough canibus in the house): "Take 1 teaspoon black peppercorns, 1 whole nutmeg, 4 average sticks of cinnamon, 1 teaspoon coriander. These should all be pulverized in a mortar. About a handful each of stone dates, dried figs, shelled almonds and peanuts: chop these and mix them together. A bunch of canibus sativa can be pulverized. This along with the spices should be dusted over the mixed fruit and nuts, kneaded together. About a cup of sugar dissolved in a big pat of butter. Rolled into a cake and cut into pieces or made into balls about the size of a walnut, it should be eaten with care. Two pieces are quite sufficient. Obtaining the canibus may present certain difficulties. . . . It should be picked and dried as soon as it has gone to seed and while the plant is still green."

****************************
Speaking of wives, I already have one but I have still fallen madly in love with 1976 Ann Wilson thanks to this appearance by her band Heart on the Midnight Special from that year. Not too into the band, especially that hairy guy dressed like Luke Skywalker (Star Wars wasn't out yet, I'll give him that), but oh Miss Ann.... her stern-shouldered dress, her hunched stance... I don't know how else to work through this so I'm blogging about it....