Got some store credit at Reckless.... 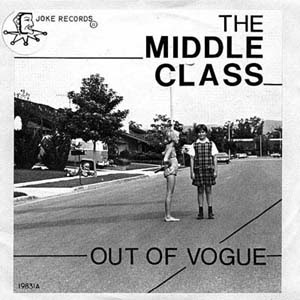 THE MIDDLE CLASS: Out Of Vogue 7" (FRONTIER) Thought it would be fun to buy this reissue of a classic for $4.99... and it has been. It is known by many as the first HC record... I guess it's either this one or Black Flag's Nervous Breakdown 7", which is listed with an October 1978 release date at discogs.com, but no one seems to know the month in '78 that Out of Vogue came out. This article says that "Out of Vogue was released concurrently with Black Flag's Nervous Breakdown seven-inch in January 1979", which on the surface would be incorrect but may be pretty accurate in an 'entering the collective unconscious' kind of way. Regardless, Out of Vogue really is a monster record. Unlike Flag, you can hear some new wave elements in there (that apparently came to the fore with later releases, none of which I've heard), but the tempo/delivery/attitude are just nuts. Drummer Bruce Atta really drives these tunes. 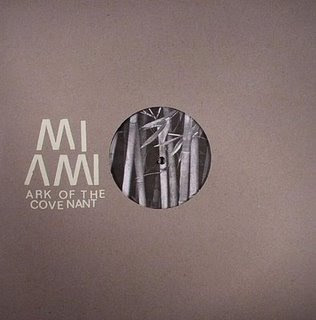 MI AMI: Ark of the Covenant 12" (LOVERS ROCK) Side A is a ripping and tearing uptempo number that is not on their excellent full-length debut Watersports. By the end it cools down a little with a roaming bassline and spacy guitars, and this is the vibe that is continued for the "version" on Side B. I'm as on the fence as anybody when it comes to the wild shrieking and pleading falsetto vocals, but you gotta applaud him for sheer boldness, and I am consistently knocked out by what all three members do instrumentally, taking some trendy influences like dub, dance, punk, etc. and making something deep, brooding, and challenging, and therefore not trendy at all. 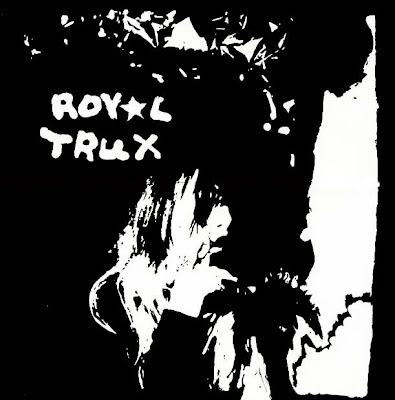 ROYAL TRUX: Twin Infinitives 2LP reissue (DRAG CITY) Oh man. Throughout the 1990s when I was doing a lot more actual record digging, an original vinyl copy of this was high on the ol' want list. It was probably the Forced Exposure review that made it so desirable, especially after buying the CD reissue -- not only did the sounds live up to the review, but the artwork clearly had to be experienced at LP gatefold scale... that stark black & white cover that folded out into a band portrait, Neil/Jennifer, man/woman, yin/yang, twin infinitives, and then on the inside foldout a huge photo/art collage, sorta like the one on the back of There's A Riot Goin' On mixed with like ancient and/or futuristic hieroglyphics... but as I often say about various records, none of it would matter if wasn't for the sounds, and these sounds were about as baffling and unpinnable as rock music got after Trout Mask Replica... I'm not going to try to explain it, but I will quote Neil Hagerty himself on the process: "I took all the tapes I had: rehearsals, studio stuff that survived, other random shit like shortwave recording etc and cut that together in a long collage. Then I broke that into short segments arbitrarily, about the length of a good rock song. We dumped those segments onto multitrack, called them songs, and just started putting little patchwork bits here and there for the next year and a half or whatever it was." Right on, and now that Drag City has reissued the thing on double vinyl in all its original gatefolded glory, I gotta say the sonics really do hold up. Side A has a bunch of short songs -- the first one "Solid Gold Tooth" is more heraldic and incantatory than likeable, but then comes "Ice Cream" and "Jet Pet" which are the two greatest songs on the album. The last two "RTX-USA" and "Kool Down Wheels" have incredible titles and sound plenty kool while listening (I just checked) but are somehow consistently impossible to remember, not because they are forgettable, but because of the dream-state fervor of creation that Hagerty alludes to in his production notes. Side B starts with another classic, the third greatest song on the album, and the first greatest manifesto on the album, "Chances Are The Comets In Our Future." (I always loved the line "Our home is everywhere we've been.") Great vocals by Herrema, on this song and "Ice Cream," in a sweeter non-growling style that she seemed to have mostly ditched in later years. Side B is rounded out by "Yin Jim Versus The Vomit Creature" and "Osiris," more incredible titles, also completely immemorable dream surge action. Side three really lays it on the line with a side-longer called "Edge of the Ape Oven," and the band comes up aces -- Trux could indeed jam extendo, though it's something they haven't done too much of during their career as a whole. (The somewhat overlooked Hand of Glory notwithstanding.) Finally, side four mirrors side one by ending the album with a handful of short tracks, again all with incredible rock titles: "Florida Avenue Theme," "Lick My Boots," "Glitterburst," "Funky Son," "Ratcreeps," "NY Avenue Bridge." Guess what, I can't put my finger on anything about any of these songs either but, like the rest of the album, they sound amazing when you're listening (I just checked). YAHOWA 13: Feather of Wisdom LP (PHOENIX) Being the furtive owner of quasi-illegal downloads of the entire 13-disc God and Hair box set, I didn't think I needed any more Yahowa music in my life. However, with credit in my pocket, this new LP seemed worth it just for the way the silkscreened sleeve looked and felt. Also, and perhaps more importantly, I had heard that it was just two side-long jams from a November 2007 reunion gig in San Francisco, and one thing I have a Carduccian appreciation for about the Yahowa music is that, from the Spirit of '76 to Yahowa 13 to Fire, Water, Air all the way up to this LP a good 30 years later, it has always been made by the same core power trio: Djin on guitar, Sunflower on bass, and Octavius on drums. That, and their total commitment to improvisation, that is, to the jam. This show/LP opens with some atmospheric chanting and gong rolls which lead into the familiar extended oozing psychedelic death-trip crud that only these three can lay down. I gotta say they sound as dark, as weird, and as crude as ever, and still with that driving garage/soul undercurrent. 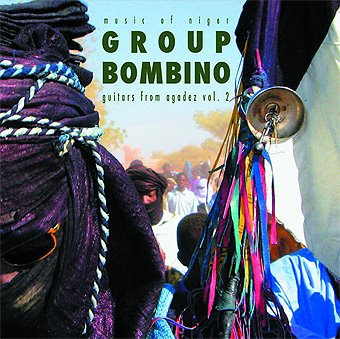 GROUP BOMBINO: Guitars From Agadez Vol. 2 LP (SUBLIME FREQUENCIES) Didn't even hesitate to get this one despite the 23.99 price tag. Well worth it, I say... another electric guitar band in that loping Tuareg style, as heard from Group Inerane on SF's Guitars From Agadez Vol. 1 release. This time, however, side one is all-acoustic, known as the "dry guitar" style, and it's really nice... the soulful, grooving, and propulsive style certainly still comes through... but when the band plays electric on the flip side, they are next-level, with a great driving machine edge. 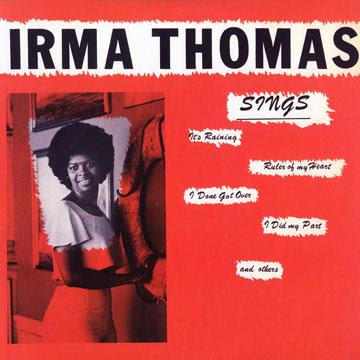 IRMA THOMAS: Sings LP (CHANGE) Oh man, what a great record. I had read about her but I really hadn't heard her music until this grey-area reissue album came out and people were raving about it. Now I am too -- I can't get these songs out of my head, especially "Somebody Told You" with its absolutely slamming verse/chorus: "Somebody told you I was running around/Somebody said with Mr. Brown across town/If ya don't see sharp ya might be flat/It's always somebody sayin this, somebody sayin that but never a fact." Then "Mrs. Brown across town" shows up on "I Done Got Over"... this time Irma is the one getting run around on, and it's more of a mid-tempo aching ballad. Or how about the slow-burning "It's Raining" and "Ruler Of My Heart"? Apparently Otis R. adapted the latter for his "Pain In My Heart" but I've forgotten all about that now that I've heard this... man, the way she sings "Make me a queen/Happy again/Hear my cry/Please, my king"... whoah. Or how about the male background vocals on "You Were Here," the tuff-as-nails way they sing the title and then actually go "Diddy-loo-bop, doo-bop, doo-bop, doo-bop"... anyway, every song on this record is truly great and I love them more every time I play it. (And hey, here's an interview with her by John Sinclair himself.)

I just picked up the Twin Infinitives re-issue myself. Waiting for just the right mood and no one else in the apartment. I've only heard bits of it in an mp3 rip, which hardly counts except that I sort of know what I'm in for.

Waiting for just the right mood and no one else in the apartment.

You've got the right idea. Set and setting!