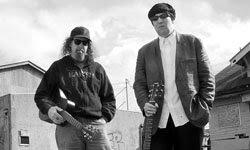 Alan & Richard Bishop are The Brothers Unconnected, a Tribute to the Music of Sun City Girls and Charles Gocher, and they played the Lakeshore Theater in Chicago, IL on Saturday, June 14. As announced, instead of an opening act the show started with a 40-minute collection of Gocher's film/video stuff called The Handsome Stranger, various vignettes and interiors and uncategorizables, some stuff that I think we've seen before on the VHS series and a lot of new-to-the-public stuff too, the morbidly hilarious head-shot readings, lip-syncings, next-level video experiments, the awesome throwdown version of "Let's Pretend" that was indeed released on the Halcyon Days of Symmetry VHS, and more. It was a fine tribute to the man in and of itself, and then Alan and Rick came out dressed to the nines and sat down with acoustic guitars next to an urn of Charlie's ashes, in front of the great image of Gocher with polaroid that you can see here, and proceeded to play two sets of music. The first was heavy on the songs with words, most from "the book of Gocher," while the second was heavier on instrumental and mostly-instrumental classics, and as intense as the Gocher songs were, the instrumental stuff was perhaps an even greater revelation. It's always been a daring body of work, the combination of non-Occidental melodies and raw American music and a whole lotta guts, but these songs in particular have most often been filtered through a punk/hardcore aesthetic and a loud guitar/bass/drums lineup. Tonight we heard them filtered through an acoustic blues/folk aesthetic by two great guitarists, simple as that, and it was stunning, with Alan more than holding his own with Sir Richard (even though he played the whole first set with just 4 strings... he broke strings during both sets with his serious right-hand technique). I won't tell you everything they played but here's some highlights: "Black Weather Shoes" (even slower than the Grotto of Miracles version, heavy and bleak), "Book of Revelations" (one of the most serious moments of the night - Alan played the music alone with the utmost implacability while Rick did the singing, channeling Charlie right down to the last spittled roar and harsh whisper of his epic vocal, read the lyrics here to get an idea), "Rodent With A View" (a short little gem about harsh food chain reality from Box of Chameleons which got a stunning epic treatment here, one of the best songs of the night), "Eyeball In A Quart Jar Of Snot" (how about that 'walking bass' playing by Alan on the low strings of his guitar, holding the thing in ridiculous poses and making faces while pulling off the most absurd flowing 'changes' underneath Rick's jazz chords and further expert Gocher channelization), "Bitter Cold Countryside" ("this is a song about hangin' a preacher"), "Nyne De Gris Sang" (another revelation in this book of revelations, coming off like some crazy fuzzy manic 60s global pop nugget from some out-of-print a-go-go compilation), regular set closer "Space Prophet Dogon" (totally beautiful with an intense outro/coda that seemed new to me, I'll have to go back and listen to the LP versions for the hundredth time, maybe it's been there all along)... that's maybe one third of what they played. The music was great but I gotta say the venue was a little off... while it wasn't NOT cool to see them in a seating-only theater (because, you know, they are fearless individuals who can work any situation), I think these guys ultimately work best in a setting where people are standing and moving around, the phenomenon that Gocher classically described as "like an ocean-herd, warm waves moving through cold waves of water." When they were playing as a trio in a rowdy club, everything was so multidirectional - there were the three minds of the band, each of which could take things in several different directions, often simultaneously, and all these energies were going from various places on the stage out to various places in the audience, and then from all kinds of varied audience members back to the band, and so on, until so many different currents and eddies and feedback loops were swirling around the room that, trust me, it was a serious drug experience without any drugs necessary. At the Lakeshore Theater the feedback loop was mostly closed (and no, I don't blame it all on the famously cool Chicago audiences because the last two SCG shows here, 2002 and 2004 at the Empty Bottle, were very rowdy multidirectional affairs) but even as a unidirectional musical presentation (you know, like 98% of all shows and concerts) I would highly recommend it, to both long-time fans and curious newcomers. And, there's still a few weeks left of the tour, with a lot of different audiences and venues and directions sure to come...
Here's the remaining dates:
6.19.08 - Cambridge, MA - The Brattle Theater
6.20.08 - Portland, ME - SPACE
6.21.08 - Philadelphia, PA - Johnny Brenda's
6.22.08 - New York , NY - Knitting Factory
6.24.08 - Pittsburgh, PA - Andy Warhol Gallery
6.25.08 - Washington, D.C. - Black Cat
6.26.08 - Asheville, NC - Grey Eagle
6.27.08 - Atlanta, GA - The E.A.R.L.
6.28.08 - Chattanooga, TN - Barking Legs Theater
6.29.08 - Memphis, TN - Odessa
6.30.08 - New Orleans, LA - One Eyed Jack's
7.02.08 - Austin, TX - Emo's
7.03.08 - Dallas, TX - Granada Theater
7.05.08 - Tucson, AZ - Club Congress
7.06.08 - San Diego, CA - Bar Pink Elephant
7.09.08 - Santa Cruz, CA - TBA
7.10.08 - TBA
7.11.08 - TBA
7.12.08 - TBA

I had more of an issue with the venue's inability to mix vocals (did they REALLY need to be that loud? Or was the additional pain Alan's idea?) than the fact that it was a sit-down theater. Seriously, the high-ends were so biting, it really kind of wore me out!

Then again, maybe that was the point?

The strange energy, to me, didn't stem from the venue, but from the very triangular nature of the group, the way Rick's implacability, Alan's perpetual irritation, and Charlie's open-hearted dementia balanced each other like points on a triangle. With one vertex gone, the entire dynamic is thrown. Which, I guess, is the idea behind this whole tour.

I gotta admit, the projection/pic of Charlie with the brothers seated below and playing "Apna Desh" got me kind of teary-eyed...

Chris- I like what you wrote here and I'm really not trying to be a dick, but they didn't play "Apna Desh."

I don't want people who like that song & think they are going to hear it to go to one of these shows and be disappointed.

Hey, check this out:
http://youtube.com/watch?v=YfjnEqMbBpg

So noted...I'm terrible with SCG song titles. It was very pretty, though!

I just saw this show (june 19) and really really enjoyed it, and recorded the second set. I have a recording of the second set if you want it. I'm also having an issue submitting lyics to the sun city girls lyrics page... I really want to!

please email me at 3dsunglasses@gmail.com to help me submit lyrics and I'll get you that recording if you want it

sorry i repeated myself...i was in a rush

Chris, you might be thinking of "Cruel and Thin", that was one of the more teary-eyed moments for me anyway... Yeah, the sound wasn't too hot but I thought they (band and soundman) worked their way into it and overcame it. And I think the additional pain WAS Alan's idea... when they sang "Fuck 'em down a one-way throat!" it was a lot more biting than when they sang "Cruel and Thin"... Yeah, maybe the idea behind the whole tour is take what was a triangulation in which three minds combined to form a fourth group mind (resulting in a pyramid) and reshape it as, I don't know, a straight line between two immediate points that extends upward into a rectangular plane that can be used as a door? Either way this show seemed as much like a new beginning as the end of something... Charlie's still with them, his words and spirit channeling through Rick and Alan, his visage staring at the crowd, his ashes floating in the air, etc.

3dsunglasses: awesome, thanks! Check the SCG lyrics page soon for the updates...

Wow, this version from the tour of "Space Prophet Dogon"... this is THE song of this tour, listen to how they're playing it, and like the first commenter says, what an epic tribute...

Hey Stuntface, how the fuck do I get a hold of you? I have several large pretentious essays & you're the only man who'll publish them...

Oh, my gmail address is krafft.ebbing@gmail.com

For underwaterness and anyone else who's gotten a bounceback from "larry at blastitude dot com": it's been changed on the main Blastitude page - send all correspondence to "blastitude at yahoo dot com" please!