Strange how, even after Led Zeppelin III gets you into Roy Harper, and you get beyond Astral Weeks into Pentangle, Davey Graham, John Martyn, and the Incredible String Band, eventually finding an even more inner tier where Clive Palmer, Michael Chapman, Wizz Jones, and Bridget St. John all dwell, and you now know just how brilliant a movement of wide-open progressive folk/jazz/blues singer/songwriter/players there really was in 1970s Britain (read Electric Eden by Rob Young and prepare to go deeper still), you can still have no idea who Mike Cooper is until the estimable Paradise of Bachelors label begins to reissue his 1970s LPs sometime in the mid-2010s. That's exactly how it happened to me, anyway, and after listening to them online and being rather blown away, the one I've gotten deep into via my very own vinyl copy is Trout Steel and man, I hope to go deeper still; the mix of folk, blues, free jazz, and slipstream poetics (the title comes from Richard Brautigan's Trout Fishing in America) is absolutely luminous, and still with a rough loose gutbucket approach that is like a cold fresh wind blowing down a hill, the tracks feeling live in a room, Cooper's keening and wry voice, a couple acoustic guitars, a stand-up bass, and some wild saxophone blowing the doors off, all in the service of wistful love/life songs like my stone cold favorite, "Don't Talk Too Fast" (listen above if you haven't already). And then there's stuff on here like "Pharaoh's March," named in honor of Mr. Sanders himself, a 12-minute-long free jazz/folk instrumental that comes late in side two and blows the doors off the whole album. 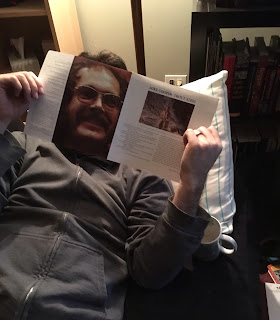 Your friendly music blogger, pictured here in completely unstaged fashion, not just enjoying Trout Steel while reading the accompanying booklet, but veritably becoming ONE with it and its creator........... (photo by Angelina Dolman)