OBVIOUSLY A MILLION TIMES BETTER THAN EVERYBODY ELSE ON THE PLANET 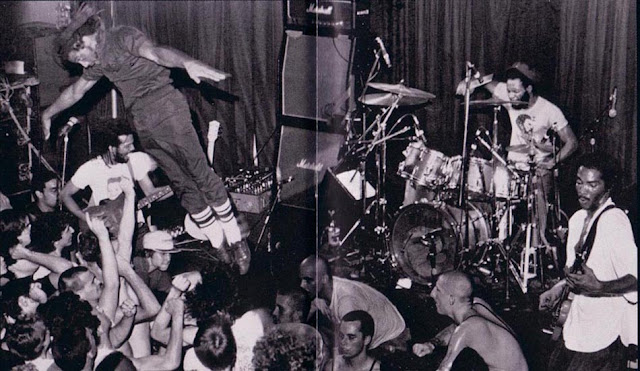 This past month I came across two great quotes about BAD BRAINS on two separate musician interview podcasts. Hearing them randomly just a week or two apart was kinda funny, but also an always-welcome reminder about how amazing Bad Brains were/are. First, on Episode 1 of The Trap Set with Joe Wong, Brendan Canty of Fugazi & Rites of Spring says, of seeing them play locally as a teenager in Washington, D.C., "Bad Brains were obviously a million times better than everybody else on the planet, like immediately." Then, on Episode 94 of the 5049 Podcast, host Jeremiah Cymerman says to interviewee Greg Fox (of Liturgy and much more), "Bad Brains will always be the greatest thing ever. In my mind there is no greater sound than Daryl Jenifer holding down a bass line while Dr. Know solos. It's literally... it's like Coltrane saxophone."

Bad Brains raves aside, both of these podcasts have amassed about 100 episodes, adding up to literal metric tons of music talk. Of particular Blastinterest might be Cymerman's interview with longtime Blastifave C. Spencer Yeh, or an excellent one with Chris Corsano (good Borbetomagus story), but he's got all kinds of people on there: Fred Frith, Mick Barr, Mary Halvorson, Matthew Shipp, William Parker, and Zeena Parkins, to name a mere 6%.... and The Trap Set has conversations with a crazy array of great drummers, not only the requisite underground greats like Mac McNeilly, Dale Crover, Janet Weiss, and pretty much every other cool drummer of the last 20 years, but also world greats like Bernard Purdie, Stewart Copeland, Sheila E., Gina Schock, and the funky drummer himself, Mr. Clyde Stubblefield (RIP).