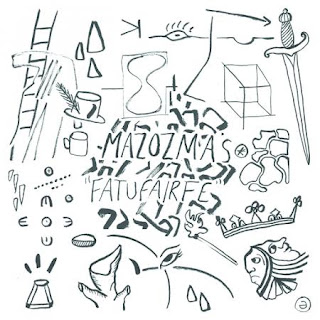 Unwieldiest band name of the week here, with a self-titled 45rpm 12" EP on the Sophomore Lounge label. Expert decoders might note that Mazozma is a nom de plume for Michael "Ma" Turner, who has been playing weird underground rock music in Lexington, Kentucky for a good 10 years now, starting with his certainly-legendary-to-me-anyway band Warmer Milks. That was a markedly different punkier noisier kind of band (cf. Radish on Light, it's cheap) but this Fatufairfe joint is just as heavy, sometimes even as scary. and might just be his most assured combination of classic-rock, post-rock, and sludge-rock yet. Only four songs, and it ends a little too soon, but they're all pretty long, big, and yearning, each going past the 5-minute mark. Don't know who the people in the power trio rhythm section are, but their playing is heavy and accomplished, which allows Mikey to do all kinds of stuff on guitar and really dig deep into some lost and dark Dead/Allmans nexus. Weird riffs and asides, drawling melodic leads, luxurious big classic rock chords slowly arpeggiating, all in service of some of his most interesting slow/weird ballad songwriting since "Penetration Initials" itself. Apparently this band only played a couple gigs, one of them being the 2014 Cropped Out festival in Louisville, so it's a good thing they got these recordings down. Edition of 100, apparently!
Posted by Larry at 11:43 AM