For those of you who were following my live tweeting of Sunday night's performance by the Muhal Richard Abrams Experimental Band at this year's Chicago Jazz Fest, I need to apologize for an error. Early in the performance, I tweeted this:

Well, Henry Threadgill was onstage, and is a flautist of some international renown, but the solo was by LaRoy Wallace McMillan, someone I'd never heard of before. I feel bad about this misidentification, partly because it continues to contribute to McMillan's obscurity -- in 2011 the jazz blog Inconstant Sol said that he is "so forgotten that it is impossible to find a picture of him on the web," which still appears to be true, and although he did play on a few AACM-related records from 1975 to 1982, he does not appear to garner a single mention in even A Power Stronger Than Itself, George Lewis's massive history of the AACM. But, I mainly feel bad because that solo was an absolute high point of the entire piece, taking that Varese/Webern/contempo-classical influence the AACM has always exhibited to boldly enigmatic, peaceful, and beautiful extremes. It's one thing to play like that when you're say, alone in a city park, but when you're on a huge stage with 9 other musicians and a few thousand people listening to you, things are different. But that's something the AACM have always been good at; if the situation calls for something loud, play even quieter to see what happens; if the crowd is noisy and indifferent, play even quieter to make the contrast more stark and powerful. Said flute solo starts just after the 6-minute mark of the video above.

In my defense, when I tweeted the error, I was all the way in the back of the surreal Gehry-designed Pritzker Pavilion, and couldn't even see the stage, just the video on the big screen above the stage. Here's my view, via terrible iPhone photograph (the big bright light underneath those trademark Gehry metallic sails is the big screen; under that and out of view is the actual stage itself): 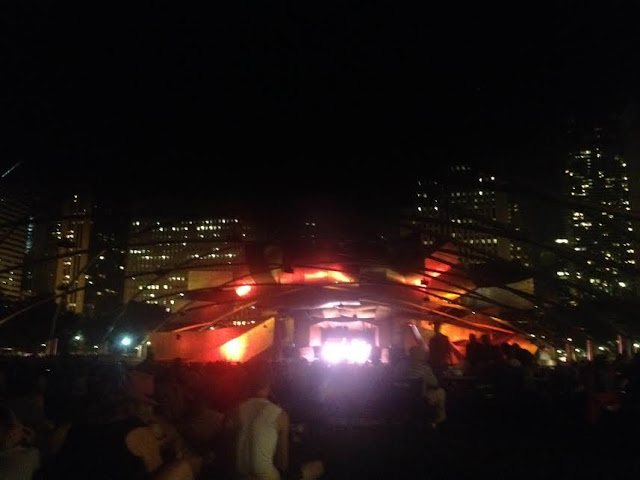 So, I was a little disoriented and unsure who was who. And, the people around me really were talking all the way through that incredible flute solo. They might not have actually been talking about wine and cheese, but they sure were consuming it while talking about other things. I'm sure you've noticed that these jazz festivals often seem like an excuse for some sort of upscale cultural picnic that's more like going glamping than going to listen to music. I can't get too mad though, because if they're there, they're still at least experiencing the Muhal Richard Abrams Experimental Band, whether or not they're actively listening to it, as my followup tweet pointed out:

It's okay, this music is seeping into the crevasses between all of our thoughts & desires and incrementally changing us forever :-) #AACM50
— Larry Fuzz-O Dolman (@Blastitude) September 7, 2015

I should also point out that before the set ended, I made it all the way down to the front rows, where there were still a few open seats here and there, and the audience was very attentive and appreciative; by no means was the entire crowd a bunch of aloof baguette-eating yuppies. And seriously, how about that music. I find it very impressive that, on the occasion of the band's 50th anniversary, being honored with closing out Chicago's biggest jazz showcase, Abrams and band (average age: 70.8!) came out without even an introductory (let alone self-congratulatory) word and immediately laid into a brand new hour-long piece of uncompromising avant-garde shadow-world music. Abrams was clearly running things, doing as much, if not more, conducting as he did piano playing, although when he did play piano it was exquisite dreamworld upper-register filigree which was effectively doubled by Amina Claudine Meyers on second piano. (This can be heard and witnessed just after the 50 second mark in the above video.) Another thing that the AACM has always excelled at is, no matter how large the group, they almost never fall into the 'everyone play at once' and 'everyone try to outplay each other at once' traps, and, at the jazz fest, in addition to McMillan's flute solo, there were unaccompanied solos by Henry Threadgill (alto sax), Roscoe Mitchell (alto sax), another by McMillan on baritone sax, double drum solos by Thurman Barker and Reggie Nicholson, and all sorts of duos and trios that fluidly came and went, everything conducted by Abram's professorial presence and remarkably long fingers.