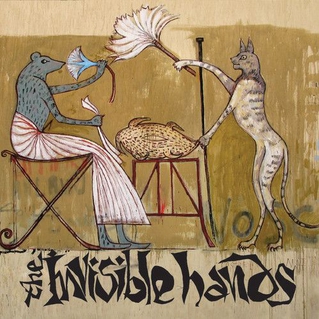 Time for a quick report on some imminent action from the Alan Bishop/Sun City Girls/Abduction Records camp... let's start with the brand new stuff, a Cairo-based band called The Invisible Hands that is releasing a self-titled full-length album on March 19th. Alan writes and sings the songs, plays bass, guitar, piano, and more, and is joined by some very accomplished musicians from the "popular Egyptian group" Eskenderella. An advance track from this album premiered on Pitchfork recently, and I caught some chatter about how surprisingly orchestral-poppy the song was. Well, it's not too surprising, as he's been going that direction for a few years now, and to me The Invisible Hands album sounds like a logical continuation of what started with his 2005 Alvarius B album Blood Operatives of the Barium Sunset (dark underworld songwriting given clean and ambitious studio treatments), up through the more recent Sun City Girls album Funeral Mariachi (even cleaner, even more orchestral, even more obsessed with vintage Italian film soundtracks, Brian Wilson, etc). Big Al just continues to get more and more assured at blending these ingredients, and there's some really brilliant stuff on this record -- fascinating lyrics ("Bad Blood" is a particular standout), great hooks, beautiful blends of keyboards and strings, a few ripping oud cameos by Sam Shalabi -- and I think more will continue to be revealed. Sure, it's the most accessible, slick, and radio-friendly he's ever sounded, but so what? Don't you like music? Also of note: there's going to be Arabic language version of this CD, only available to purchase in the Middle East, with both versions to be available for digital download and as a limited edition double LP "in the very near future." Abduction is also going to release another CD on March 19th, this one featuring some classic old stuff by the Sun City Girls, more specifically Eye Mohini: Sun City Girls Singles Vol. 3. The two previous singles comps were superb, but this one collects the entirety of the monumental Borungku Si Derita double-7" EP and the nearly-as-great Eye Mohini 7". I think I once called the former "my favorite Sun City Girls album" -- it has definitive versions of two classic Sir Richard Bishop raveups (the Egyptian surf pounder "Abydos" and the joyful hopped-up-on-goofballs trad-jazz number "Rose Room"), the lovely and mysterious "Carousel Tapsel," a sweetly ratty down-home guitar-guitar-drums trio version of "Esoterica of Abyssynia," the fearsome dirge "Smile," and I'm not even mentioning a couple more great tracks. From the latter, "Eye Mohini" is one of their most heartfelt vocal ballads, "Kal el lazi kad ham" one of their most regal instrumentals, and "Lemur's Urine" features Eddy Detroit on bongos and is called "Lemur's Urine." All this and much more, including a very heavy album-closing 10-minute live version of Torch of the Mystics classic "The Flower" from 1992. RIP Sun City Girls, nice to have you back.

Keep your eyes on Forced Exposure for official announcements these next couple weeks.
Posted by Larry at 9:43 PM