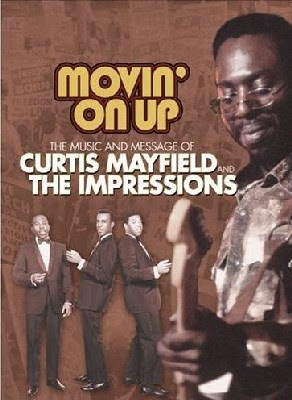 For the last couple days I've been watching this Curtis Mayfield DVD called Movin' on Up: The Music and Message of Curtis Mayfield and the Impressions. It's basically an extensive oral history in which the talking is interspersed with no less than 19 complete live performances from over the years 1965-1973, with a total running time of over two hours. This is basically the format I wish all music documentaries would follow. Keep the talking, because that's how stories are told and memories live on, but tell the story in chronological order and show live performances as completely as possible throughout... don't bring any 'experts' to talk unless they were actually 'there', and don't talk about the music when you could be showing it... this formula might not make for a fast-moving and constantly riveting final product, but this ain't MTV, this is documentation. This DVD adheres to the formula so well that I found myself fast-forwarding through the Impressions history a little bit, not because I didn't love the tunes (and the great interview subjects: the other two Impressions Sam Gooden and Fred Cash, Curtis's widow Altheida Mayfield, civil rights activist and former U.S. congressman Ambassador Andrew Young, and Chuck D) but simply because it was so extensive, and I just had to get to his solo career, that heavily-conscious float-like-a-butterfly feather-funk he was doing 1971-1973. It really is the best part, and it's really something to hear his cohorts talk about his songs as they get more and more challenging. Ambassador Young was and is shaken by Curtis's challenge "If There's A Hell Below (We're All Gonna Go)" but stands tough and puts a positive spin on it, and the discussion between Gooden and Cash over "We People Who Are Darker Than Blue" gets pretty deep - they agree that when Curtis says "they" in the song, he's talking about white people, but Gooden calls it an angry song, while Cash says he took it a whole different way, as an inspiring call for do-it-yourself uplift.

Of course, we could go on for days about the sociological impact of Curtis's early solo career... but how about that band?! I'm talking about the 1971-1973 era five-piece band, of course, and even though I've been listening to the masterful Curtis/Live! 2LP for years now, it wasn't until watching these clips that these players really clicked for me as an organic touring small group. They are surprisingly unknown musicians, especially considering that they were the band on that beloved live LP as well as what is probably Mayfield's best-known studio LP, the Superfly soundtrack. Curtis of course plays great subtle rhythm guitar with some sparse and clean leads, but very little is said about the band's second guitarist, Craig McMullen. This guy played great wah-inflected counterpoint, combining lead lines and strong chordal playing in a sweet, laid-back, but still completely bad-ass post-Hendrixian manner. Plus, he always wore a rad hat. He appears to have played on a few albums back in the day, by the likes of Donald Byrd and Stanley Turrentine, but I can't find anything on the internet about where he came from or what he's done since. On bass was Joseph "Lucky" Scott, another very solid, aggressive player who really pushed and moved through the band's arrangements with a restless and slightly heavier-than-the-norm style, somewhere between James Jamerson and, I don't know, someone like Tim Bogert. The famous basslines for "Freddie's Dead" and "Pusher Man" were probably written by Curtis but it was Lucky who hammered them down. The rhythm section was rounded out by a smooth drummer named Tyrone McCullen, about whom even less is known than Craig McMullen (although he's introduced as being from Chattanooga, Tennessee on the Curtis/Live album), and last but definitely not least, the only band member besides Mayfield with a Wikipedia page, Master Henry Gibson on "bongos/congas/tumbas" - his hand percussion is probably the single most identifiable presence in the band other than Curtis's falsetto. (Plus, he's an alumni of Phil Cohran's African Heritage Ensemble!) Together, this band played sublime stripped-down heavy soul music, worthy of more notorious bands like the Jimi Hendrix Experience and Funkadelic, but with the pyrotechnics dialed down to an expert simmer. One of their very best performance sessions was in 1972 for the UK show The Old Grey Whistle Test. Here's a couple clips from YouTube:

"Keep On Keepin' On"

"We Got To Have Peace"