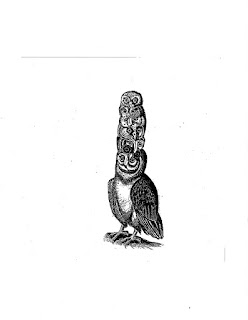 "Here is a group owned compilation made by bands and artists originally brought together by the eclectic underground of New Brunswick, NJ after the turn of the century. A collective spirit brings forth new tracks from each unique artist/group." Indeed, this is like a trip down memory lane for me as well, as all of these New Brunswick bands & artists have been sending stuff to Blastitude dating back at least ten years ago. There was also the Bone Tooth Horn label, and the artist formerly and currently known as 2673; yes, the New Brunswick scene has been interesting for awhile now, and would have been more than worthy of a scene report in The Wire circa 2006 (if one didn't in fact happen). I kind of did one myself back on The Day of the Mushroom, 2007, and though these players seem to have dispersed somewhat from that central hive of activity, this 7" EP is a very nice "where are they now." (I also really like the 4-band 4-song 7" comp EP format for some reason.) The Shadow Band is fronted by Mike Bruno, who I was introduced to via a release under his own name back in 2009 called The Sad Sisters. That was in a striking semi-gothic progressive-folk kinda style, but the Shadow Band sounds a little more classically pop/folk/rock, with a real nice lilting Sunday-morning melody and a sweet guitar/organ arrangement on this song "Blue Dreaming." King Darves first came on our radar back in 2004 or so, first as a weirdo solo noise artist, then suddenly emerging as a some sort of medieval/futuristic also-progressive deep-voiced folk troubadour, most notably with a 2008 full-length for DeStijl Records called The Sun Splits For The Blind Swimmer. His song here is in that style; I know some people have had a visceral reaction to King's distinctive sound & voice and simply can't hang; I've always admired his work but even so was slightly nonplussed by the off-kilter banjo-driven dare-I-say-gypsy-punk musings of this song "yoke/sightline" (actually these are two separate songs as I learned from reading this interview), especially after the elegant smoothness of the Shadow Band, but on 2nd through 5th listens the appreciation is growing and Mr. Darves always gives you a lot to chew on. So, side one is kinda the 'soft' side, and side two is where the volume gets cranked up. It leads off with a track by a band called Quit, who I don't believe I know anything about except that the insert says their label is Log Cabin Recordings; their track "bleeding" is a bit of a wound-up slow-drag somewhat-U.S. Mapley instrumental scorcher and may be my favorite thing on here. The comp ends with the long-running Human Adult Band, who have always been in the Flipper tradition of slow sludgy weird punk but with their own voice/twist that I've never quite gotten a handle on, in a good way; on here they're still leaving my head scratching after two heavy/catchy/confusing minutes called "(If You Got) Worms On The Brain." Human Adult frontman/bassist/founder/CEO Trevor Pennsylvania recently published a book called Lazy Determination that is apparently some sort of band discography/memoir that I would like to read but it seems out of print and hard to purchase, let alone google. Anyway, their song here ends abruptly, as does the comp, which makes it very easy to replay, which I've been doing again and again; long may the Spirit of New Brunswick fly on. You can purchase your own copy for $5 (postage paid in the United States!!!) at https://kingdarves.bandcamp.com.
Posted by Larry at 7:02 PM