THE MAKING OF BULL OF THE WOODS 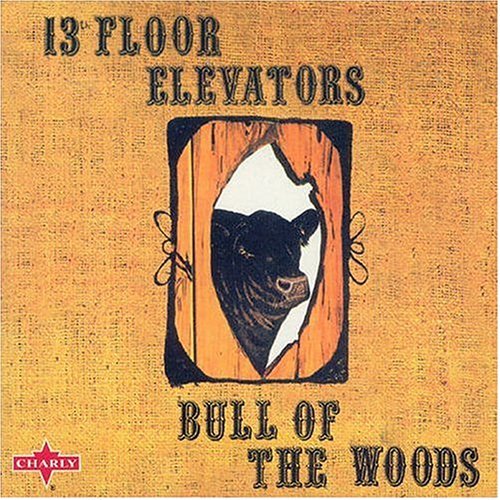 INTRO: Last time I went out to a show I was doing the usual standing around talking about music in between bands and blithely announced that Bull of the Woods was my 2nd favorite 13th Floor Elevators album (Easter Everywhere being the fairly undisputed #1 choice). I got some push-back, but stuck to my guns. Now, away from the front lines, I'll admit it's not even true -- can't deny the greatness of Psychedelic Sounds Of..., for historical reasons alone -- but even if Bull is the 3rd best Elevators album, there is no doubt that it's the Elevators album I'm most obsessed with, and it's probably the one I've actually listened to the most. It's an album that feels like it's slipping away from me even as I listen to it, which is partly what keeps me coming back. It also reveals new depths every time. I just listened to it an hour ago and I'll be damned if the rhythm section on "Scarlet and Gold" didn't sound heavier and dubbier than ever, and how about the crashing and echoing waves of Stacy Sutherland's guitars on "Street Song" as he coolly drawls "I saw some windowpane"? (And by the way, the Decal CD from 1991 sounds 100 times heavier than this thing does on Spotify, just sayin'.) So, when I finally got around to reading Eye Mind, Paul Drummond's exhaustive history of the Elevators, I decided to use it to write up a little outline of the making of Bull of the Woods... anything to try to understand this album a little better. I post it here for the hell of it... maybe some fellow obsessives will appreciate it..... (this is a chronological summary in my own words of the particulars of Drummond's text... any text in quotes, besides song titles, is Drummond's, taken directly from the book)...

AFTER the monumental Easter Everywhere is released in October 1967, the physically and psychically fractured band disengages from the intensity of the last two years. Members become scattered around Houston. Roky is not doing well, living a nomadic existence around the city, suffering from performance anxiety and increasingly showing signs of a serious personality disorder. Tommy Hall relinquishes "his totalitarian hold" over the band and tries to build a new non-musical acid community around workshop meetings at his apartment, which effectively promotes guitarist/songwriter Stacy Sutherland to being the band leader. Bassist Danny Galindo leaves the band, and is replaced in January 1968 by Duke Davis. Where Roky and Tommy took the lead in creating Easter Everywhere, it is understood that Sutherland will take the lead in the creation of their next album. Although the band is not necessarily in a good creative space, their label International Artists is pushing them hard for product, especially since they are unable to leave the state of Texas due to various probations, and cannot generate income from touring.

February 7th: The trio of Stacy Sutherland on guitar, Duke Davis on bass, and Danny Thomas on drums start doing sessions for the third 13th Floor Elevators album at Gold Star Studios in Houston. Sutherland is the band leader, creative director, songwriter, guide vocalist, lead vocalist. The song "Wait For My Love" is the first to emerge.

February 21st: The trio has developed enough material to bring Roky and Tommy in. Tommy is developing his concept for the album, dealing with the Electra complex of his then-current relationship with Gay Jones. The working title is Beauty and the Beast. Nothing they work on this day ends up being released.

February 22nd: The previous night's fruitless session ends at 8:30 AM. Roky returns sometime in the early afternoon to find none of the band there. He is convinced to do some solo recording, and lays down a few electric guitar-and-voice takes of his song "May the Circle Remain Unbroken," adding his own Vox organ overdubs. By evening, Roky is joined by Tommy, Stacy and the Duke Davis/Danny Thomas rhythm section. They very quickly lay down "Livin' On," lyrics by Tommy, music by Stacy. Then, they start overdubbing on "May the Circle Remain Unbroken" to frankly legendary effect. This was the only album session for which the entire band was present.

February 29th: Working without Tommy and Roky, the band lays down the music for "Never Another."

March 3rd: Roky lays down vocals for "Never Another" and "Livin' On."

March 12th: Stacy and the rhythm section work on the music for "Dr. Doom," lyrics by Tommy.

March 20th and 23rd: After these two more sessions, ten tracks are in the can, although six of them don't have finished vocals. "Never Another," "Livin' On," "Dr. Doom," and "May the Circle Remain Unbroken" all do. The band breaks from recording, intending to spend all of April playing shows, doing a club stand in Houston. However, Roky refuses to go onstage, or doesn't show up at all. Not one full show is achieved.

Early April: Impatient for progress, International Artists decides to release a single of "May the Circle Remain Unbroken" b/w Stacy's song "Wait For My Love." This sends Stacy to the studio alone, trying to improve the song with "endless" overdubs. It undergoes a name change to "Someday My Love."

April 20th: In bed trying to sleep, Evelyn Erickson hears her son Roky "screaming" and "talking gibberish" outside. This is considered the first real psychotic episode for Roky. Early in the morning, he is taken to an emergency psychiatrist, the beginning of Roky's fateful involvement with the Texas psychiatric police state. Tommy is still trying to settle on a concept for the album. He begins exploring Gnostic Christianity and writes a mysterious chant called "Jerusalem (Supersonic Highway)" which is performed a few times in a rather desultory fashion.

May & June: As spring passes into summer, International Artists rejects Stacy's "Someday My Love" as the B-side and decides to replace it with a Buddy Holly cover outtake from 1966. Stacy does more work in the studio in May and June, though it is not certain what is produced here except the controversial horn overdubs on "Never Another," "Livin' On," and "Dr. Doom." These were laid down by two trombonists and one trumpeter from the Houston Symphony Orchestra, on Danny Thomas's invitation.

July: Still impatient with the way the third album is developing, International Artists begins production on the fake Live album. Duke Davis drifts out of the band and is replaced by the returning Ronnie Leatherman. The band fragments further when, behind Stacy's back, Tommy and Roky attempt to relocate the band to San Francisco with a new rhythm section.

August: In a final run at the 3rd album by the Sutherland/Leatherman/Thomas trio, 7 new songs are recorded. "Down by the River," "Scarlet and the Gold," and "With You" are keepers. "Someday My Love" uses a new set of lyrics by Tommy Hall and becomes "Til Then." Ensemble vocals by all three members are laid down. In the meantime, the fake live album is released.

September 26th: The third album is declared finished and in the can. Stacy gives it the title Bull of the Woods, reflecting the resiliency and determination it took for him to get the project done.

February: "Livin' On" b/w "Scarlet and the Gold" is released as an advance single.

March: Bull of the Woods is released. "[Stacy's cover concept] was to portray the band's Texas heritage by using the silhouette of a longhorn bull to similar effect as the familiar representation of the proud Spanish bull. [Rather clueless International Artists label head Bill] Dillard took the title literally and lifted an image of a bull's head poking through a wooden fence, from a steakhouse menu he swiped." The record barely sells at all but its deep haunting sounds are still "livin' on".....