Oh man I got to hear a preview of the Blues Control & Laraaji album, due out from the RVNG INTL. label in November. What can I say, I loved it. Why is Blues Control so much better at deep new age than all the new new age scene heroes of today? Is it because they're over 30 years of age? I think that's part of it. As a wise man recently said, "never trust anyone under 30." Of course, much credit for the success of this music is due to Laraaji, also over 30 years of age and a legit deep new age veteran, who contributes immensely with great vocals, improvisational celestial intangibility... and laughter! A perfect appetizer for the upcoming Blues Control full-length, which will be their fourth 'proper' album if I'm counting correctly, and their first for the great Drag City label. (Check out these interviews with Laraaji and Blues Control by Andy Beta.) 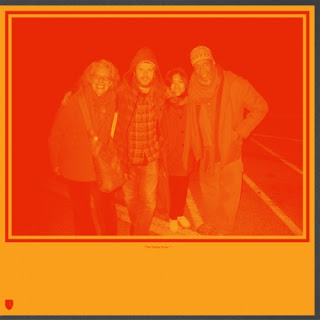 Absurdly heavy and lyrical arco bass solo throughout "Yesterdays" by Paul Chambers, notably reverbed-out for 1957. Great laid-back guitar comping by Kenny Burrell gives it the swing and makes it a tune, so that Chambers doesn't ever really have to stop improvising. Nice to hear him go off, as I know him primarily as the rock-solid and absolutely team-playing bassist on Miles Davis's Kind of Blue, although I'm sure I've heard him go off here or there without even realizing it, as he recorded about a dozen albums each for both Miles Davis and John Coltrane, and a whole lot more besides, which is very impressive for a guy who passed away at age 33.

It was bound to happen; at some point in the last couple years, young Claire Dolman, age 6, caught a glimpse of the band KISS in full regalia, probably in a commercial for Dr. Pepper during a basketball game, and when she learned that those monsters ranting about soda pop actually played music, she instantly became a big fan, fascinated with the idea of Monster Bands, even once overhearing the Misfits and correctly identifying them as a "monster band." Granted, her favorite Kiss song is "Beth," and she requested that tonight, so being El Padro Coolio I pulled out Destroyer, ON VINYL OF COURSE, the same copy I've had since I was way into monster bands myself, circa 1978. I haven't played it in a good 20 years, but it sounded great, just a really good 1970s metallic bubblegum pop record, right up there with Sweet Desolation Boulevard ... although I did play Side 2 first, which starts with the irresistibly goofy and lyrically randy Broadway-pop anthems "Flaming Youth," "Sweet Pain," and "Shout It Out Loud," before settling down for the real note-perfect show-tune action of "Beth," and then right back into the yearning sardonic night-time-world glam-pop majesty of "Do You Love Me?," its sassy lyrics co-written by Kim Fowley. Ah, but then it was back to side one and that oh-so cinematic (or should I just say Ezrin-matic?) "Detroit Rock City" opener... when the song finally starts, I always thought it was a good, dark, patient midtempo riff tune, and it pretty much is, but this is the first time I've listened to the song since watching the Chicago-made MC5 documentary A True Testimonial back in '02, when it premiered here in town before being quickly suppressed by members of the band, a state it is still in today. In the film, drummer Dennis Thompson is asked something, possibly about the MC5's influence on later bands, and after his answer, he closes with "Oh, and Kiss? FUCK YOU." I watched that almost 10 years ago, but tonight "Detroit Rock City" brought back the memory, and I understood it then, but now I really understand it. The refrain where they shout "Get up! Everybody gonna move their feet/Get down, everybody gonna leave their seat/Gotta lose your mind in Detroit Rock City," really sounds like they are playing dress-up in their Kick Out The Jams costumes, but in a really strange and rather cynical way, more like a big-budget fictionalized Broadway musical cash-in based on the career of the MC5 would sound like, and just imagine Bob Ezrin trying to dress up as John Sinclair. After that the band (or Ezrin acting on behalf of the band) wisely follows with another Fowley tune, "King of the Night Time World," pop-metal grandiosity that detours mercifully away from Grande Ballroom wannabe fantasies into their own comic-book bubblegum trip. And after that, "God of Thunder," sheez. Say what you will, it's 10 times better than any of the boring screamo doom sludge I'm hearing these days. Certainly no one has topped the demon-children sound effects. Basically all I'm saying is that not only is it legitimately heavy in a proto doom metal style, but it's also fun, which none of these new bands are, to which they'll say "That's the point," to which I'll say, "Which is why I don't listen." And "Great Expectations"? WTF? I'll just let #1 monster band fan Claire have the last word on it, because when it came on after "God of Thunder" she said, presumably directly to mean Gene himself, "What?? You can't do this! You were born and raised of the demons!" I tried to tell her that superstar producer Bob Ezrin was NOT raised by demons, but I don't think she was listening.

So Destroyer is pretty great, but Hotter Than Hell is still my favorite Kiss LP. It has an absolutely stunning cover design, especially the back cover, one of the craziest things I had ever seen at age 9 or whatever. Looking at it now, it still seems like the most successful musician-as-superhero band photos I've seen, which is all the more humorous now that we know how weak these four guys really are in real life. (Although what about Paul Stanley? Doesn't he have any problems? Hmmm.) Anyway, the cover was great enough, but then there was the sound of the album. Talk about proto-sludge! The band sounds like its playing every song at about 80% of the correct speed, the guitars sound bright, wet, muddy, and dry all at once... but yet it's still great. Can anyone tell me why? That's right, you in the front row, it's because of the songs. Everything tends to work when you have good songs, and this really is a memorable batch, one comic-book power-pop absurdity after another. Just dig how "Got To Choose" kicks off the album with an atonal guitar clash into a sludgy riff that is somehow becomes yearning molasses-slow power-pop love-song hogwash that has an awesome "oo-oo-ooh!" chorus hook! And then the next song is a churning and menacing body-horror stomper written by Ace Frehley called "Parasite"! And then, my god, "Goin' Blind," and if you don't know that unsettling power ballad masterpiece from Gene himself then I'm sure you know it from Buzz. And then Paul throws down the title track, which is probably the most blatant rip-off of Free's "All Right Now" ever recorded. "Hot hot, hotter than hell; you know she's gonna leave you well done." Hoooo boy. It really doesn't let up either -- I think "All The Way," "Watching You," and "Strange Ways" are also all great tunes, and the others certainly don't slow anything down. As funky and freaky as anything the Coop was making at the time. 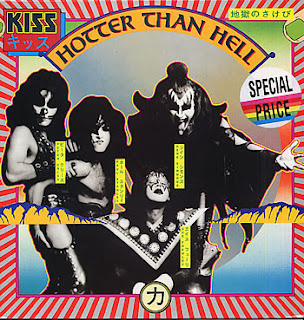 Now I didn't switch from Kiss to Bach to try to impress you with the stunning eclectic breadth of my musical taste, it's just that Claire wanted to practice some ballet. I mean, she was cool about it; she tried to do it to "Watching You" by Kiss and kept up with it for well over a minute, but then she was like, "Can you just put on some classical music?" and who could blame her? I know I don't want ballet and Gene Simmons anywhere near the same room together. So Bach, here we come. By the way, there's this poster at the place where my daughter takes dance lessons that says "Dance is the only art in which we ourselves are the stuff of which it is made." That's kinda been blowing my mind.

"This is the ape man / Trodding through creation / Are you ready to step with I man?":

(I played Super Ape for the second time this week because it's awesome, and also because I came across this nice piece about it on Upsetter Station: A Lee Perry Magazine, and had to listen along while reading.)

Haven't really gotten into Flying Lotus yet. This is my 3rd or 4th try, and it's especially difficult when it comes right after Super Ape and Satwa, both albums that are light and airy, with lovely and rich room-sound in abundance, only to be yanked suddenly 30 years into the future and into a claustrophobic overloaded direct-into-the-board electronic recording with no air or room to breathe whatsoever. The songwriting too is more overload-oriented than groove-oriented.... okay, now, just past the one-minute mark of the second track "Breathe Something/Stellar ST," and a discernable backbeat and a somewhat melodic groove has emerged. Not bad, the beat and groove creates space, opens up some air, allows the track to develop an atmosphere. Hmm, track 3 "Beginners Falafel" is better still. Definitely some interesting futuristic grooves on here, I'm coming around a little, but overall it still sounds more like someone using their computer to put together jigsaw puzzles than it does someone making music.

More from Casablanca Records courtesy Parliament! I always thought Up For The Down Stroke was a top-notch underrated album, right up there with Mothership Connection. Worth it for the title track and "All Your Goodies Are Gone" alone, but then you get the 9-minute "The Goose" on top of it. C'mon, chant with me, "Ooh, ah, babe / you're so-oh sweet" (truncated promo single version):


And finally, I will leave you with this seasonal masterpiece:

Quality post. Especially liked the stuff about Claire digging monster bands. I know it's been done before, (maybe even by you), but I always like reading record reviews as told by children.

I like that Flying Lotus album, and only that one. The next one has this crazy fusion bassist on it that is kind of interesting, but it's even more claustrophobic than Los Angeles.