PREVIEW FROM BLASTITUDE #28 (some record reviews) 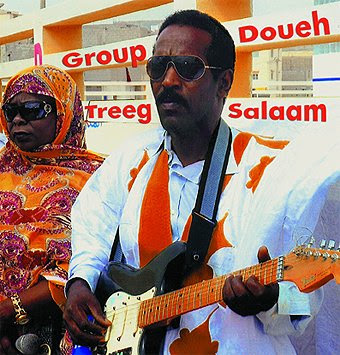 GROUP DOUEH: Treeg Salaam LP (SUBLIME FREQUENCIES)
All of these tracks are archival, recorded between 1989 and 1996, but Hisham Mayet's selection and sequencing and most of all Doueh's constantly swirling blasted guitar playing still threaten to make Treeg Salaam the White Light/White Heat to the first album's Velvet Underground & Nico -- it's a little rougher and jammier, and the B side is even a single 18-minute track. Unfortunately, it's no "Sister Ray," but a rather distantly recorded performance in which Doueh's leads are more buried in the mix than usual. It does grow into a pretty intense and hypnotic track though... as far as the John Cale references go, maybe his production of "We Will Fall" by The Stooges is a better comparison... and Side A seriously rips, with several genuine "and then my mind split open" guitar moments. 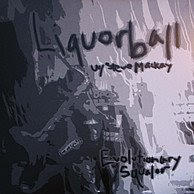 LIQUORBALL w/STEVE MACKAY: Evolutionary Squalor LP (ROCKETSHIP) As a big fan of their 90s album Liquorball Fucks The Sky, I'll admit that I had initial concerns with this ten-years-later release. The B&W solarized 'avant jazz' live shot on the cover made me ask, "Do I really wanna hear them ten years later jamming with a guy on sax? Even if it is the guy who played sax on Funhouse?" Well, it turns out that the answer is "Yes, of course I do." This is a recording of an April, 2008 live gig (written about and even titled here) at guitarist Grady Runyon's record store and Liquorball showed up ready, laying down sinuous and mean uptempo hard-driving thug-psych grooves that slide and insinuate in ways that sound like they've spent the last 10 years doing a lot of playing and/or growing, and duh, of course Mackay is great. Just like on Funhouse, he knows that job #1 is to riff with the band, and as such his solos never wear out their welcome, and most importantly he knows how to hang back and blend in. Hell, there's a guest harmonica duel somewhere on side one and even that's okay, and in fact excellent, because the groove kills throughout. No monstrous/hilarious vocals this time, just the sound of tough and confident psych jam burn that is older and wiser, and in the right way.

A MIDDLE SEX/TEMPERATURES: Unclean Yawn/Bifurcation split LP (CARNIVALS) Nice to have underknown UK band Temperatures back after being blown away by their edition-of-100 Ymir LP a couple years back... their side here might be even better, just a lurching, grinding mutant 16-minute thing with plenty of rock swagger. This band should be huge... at least with this split LP they're up to an edition of 300. Maybe next one will be 500 and they can reach the Billy Bao fans. A Middle Sex is another UK band, and their shit is cool too... some sort of galloping drum-driven avant-pop whatsis... they pick up the This Heat torch and run with it, but they had so much caffeine and/or LSD that they keep dropping it and staring directly into the sun and/or the pretty swaying trees. Then they remember what they were doing and pick up that torch and run again... but then get sidetracked again by a pleasant stream... and so on... and it all flows much better than that would suggest.

BELUGA: Pet 7" (SELF-RELEASED) Fashionable multi-cultural and presumably metrosexual New Yorkers playing "the brand of lo-fi rock and roll they always wanted to play." In fact, they recorded these two songs in one take in their practice space. They've been compared to the Bangels [sic] and the X-Ray Specs [sic], and while the voice of "their Brazilian front woman Isabel Ibsen" does cut with some real sass, the songs are pretty run-of-the-rockin'-mill. It's appropriate that their one-sheet talks about how the band has drawn "the attention of press and marketing teams alike," listing some of the ad campaigns they've already been featured in (K-Swiss!), because this really does sound like the punk rock you'd hear in a mainstream media commercial.

CHEER-ACCIDENT: Fear Draws Misfortune CD (CUNEIFORM) This Chicago band has been operating for 27 years, in which time they've predated, been associated with, and outlived such regional movements as Chicago No Wave and Chicago Math Rock, all while being nothing less than real-deal modern-day epic pop-prog masters. They were recently the deserving cover stars of Signal to Noise magazine and have signed with a real-deal modern-day prog-rock label, Cuneiform, that has been going as long as they have. Their first record for the label is this one, out now, and it's a good one. No one song stands out, but a suite feel comes through instead, in which interchangeably playful and classically prog-melodic male/female vocal melodies circle and glide over cycling and pounding riffs that have a heavy Magma/Udu Wudu bounce. Fans pick it up now, and for newcomers it's an excellent place to start.

MATHS BALANCE VOLUME: Lower Forms LP (SELF-RELEASED) Finally some wax from these deep underground Mankato MN miscreant tape/electronics/mics/weirdness jammers, self-released, down and dirty, B&W paste-on style. Even better, they've used the 12" format to hone their long-form space-out jamming into weird shorter song-forms. There's seven tracks on here, anyway, and most of them have what just might be an actual lead vocalist, a female one at that. If that's her on the cover along with the two creepy dudes in the window (who I'm assuming are the two dudes in Maths Balance Volume), then I'm really freaked out.

RTFO BANDWAGON: Dums Will Survive LP (DULL KNIFE) My intro to this band, and I didn't know what to expect (lo-fi, Columbus, dare I say shitgaze?)..... but this?? A band that sounds like one or two totally accomplished smart and cutting singer/songwriters with plenty of hooks and a crack backing band from say Nashville circa 1974 that has time-jumped just four or five years forward, just enough to know about The Fall and general post-punk guitar damage? And they only caught a brief glimpse of it, too, a very brief glimpse.... I really don't know what else to say but this LP has invaded my life with it's completely well-done songwriting, casually adept musicianship, and sweet male/female vocals... I mean what's up with "Between the Ears" being such a C&W ballad masterpiece (the pedal steel guitar by Larry Marotta himself certainly helps a lot)? What's up with the stately soul of "Like A Bridge Over Dan Shearer," and the inzayne production on its piano overdubs? What's up with the album ending with like a 7-minute damaged-guitar instrumental reprise of the title track? What's up with the cover, the insert, the "dums" album concept? I don't know, you figure it out, I'll be happy listening...

SUETTA: Olympic Stain (1994-1996) LP (SUMMERSTEPS) Flashback to the Lollapalooza generation and some rural Pennsylvania highschoolers under the influence of Dirty and the dark side of 120 Minutes are bashing out some demos. 15 years later one of the band members puts it on vinyl (1oo copies), and I can see why. This is awkward, rough, and derivative music but it has a wild-eyed youthful born-in-isolation exuberance that most do not achieve. It also has that early-90s Homestead Records indie-rock drug-damage down surprisingly cold, although it's possible that these kids were getting it all second-hand, without actual Homestead Records and maybe even without actual drugs. Side B is a mock live show in a house that the parents had moved out of.... it's not as musically worthwhile as Side A but still has time capsule value.