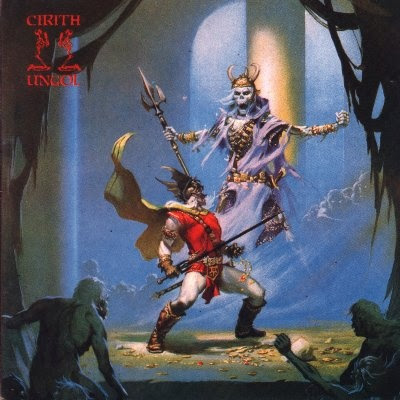 CIRITH UNGOL
King of the Dead (Enigma, 1984)
If you're reading this you've probably heard of them, and have assumed correctly that they are a metal band, but have you actually heard them yet? Apparently the band was formed in 1972, but existed somewhat nebulously and without discography until 1979, when they self-released a demo tape and then an LP called Frost & Fire. Finally in 1981 they scored a deal with independent metal/punk/new wave powerhouse Enigma Records (Poison, 45 Grave, Agent Orange, DEVO, Don Dixon, Bill Nelson, Peter Hammill, Al Stewart, Barren Cross, Berlin, Channel 3, Lääz Rockit, Chris Poland, XYZ, The Dead Milkmen, Death Angel, Obsession, Stryper, Great White, Hurricane, Green on Red, Lizzy Borden, Mötley Crüe, Mojo Nixon & Skid Roper, Ratt, Red Hot Chili Peppers, Slayer, The Smithereens, Steve Kilbey, Guardian, TSOL, The Untouchables, Wednesday Week, Ike Willis, The Leaving Trains, Plasticland, The Terminator OST, River's Edge OST, Sonic Youth's Daydream Nation...), who re-released Frost & Fire and then three more albums that, though highly identifiable due to the sword-and-sorcery cover paintings by Michael Whelan, were completely ignored by almost everyone, to this very day.

I think people were/are simply put off by the name, one of the weirdest in heavy metal history, an unknown phrase that may be the name of a person, place, or thing, or perhaps some strange state of being, but in any case strikes a perfect pitch between fantasy, horror, and total arcane obscurity. What it really means is "spider's cleft," at least in the Elvish language Sindarin, and it is the name of a fantastically extreme mountain pass in J.R.R. Tolkien's Middle Earth (check The Return Of The King). This is all very heavy, but then you finally hear the band, as I finally have via a digital copy of their second album King of the Dead (generally considered their best), and the whole story takes another left turn, because they don't come on as ultra-heavy. Even though they were SoCal peers with Metallica, having appeared on the same 1982 Metal Massacre comp that James and Lars and company debuted on, their grooves are slower, bluesier, stonery-er, very 1970s hard rock, a sound that competely ignores punk and its speed-metal stepchildren. (Says drummer Robert Garvin in an interview with Sleazegrinder.com: "I like a lot of punk and that’s why I guess we were so turned off by speed metal, because it seemed as if it was an unholy cross of punk and metal, I still don’t like speed metal or rap rock for that matter.") They are also more midrangy than you might expect -- even the bassist Michael "Flint" Vujea has a trebly tone, plays loose with the riffs, and sprinkles in plucky fills that are sometimes even borderline jazzy. Another left turn comes in the form of occasional crude classical filigree (the penultimate track on King of the Dead is a shred-metal version of Bach's "Tocatta in D" -- after all, another peer was Yngwie Malmsteen himself, who also made his vinyl debut on that first Metal Massacre comp, in the band Steeler) that furthers the twisted 'garage occult' flavor of the band name, and can blossom into moments of heavy-duty epic-ness, such as the twin guitar solo on "Finger of Scorn."

But nothing about the band is as twisted as the singer. He is the amazing and terrible leather-and-headband-wearing long-hair named Tim Baker, and he sings in some sort of constant screeching hiss. I'm sure mileage will vary on this guy, but he had me by the second song, especially because said song is called "Black Machine" and has a chorus that carries on the same biker dirge riff as the verse as Baker hisses one of the ultimate metal phrases: "Get on and RIIIIDE!!!" followed by "The Black MaCHIIIIIIIIIIINNNE!" Not to mention verses like "Pearly whites behind back drawn lips/Ride with the Masters of the Pit/Snapping jaws of the dogs of doom/Kick your way from this stagnant tomb." The lyrics throughout the whole album are prime sword-and-sorcery/horror/comic book stuff, with nothing about babes, partying, or anything from the entire modern world mentioned ever. (This is not the case with their debut album Frost & Fire, which is still a pretty interesting listen, but with a bit more of a party-metal thing going on, and I haven't been able to get into it after King of the Dead. Still haven't gotten to their later albums.) 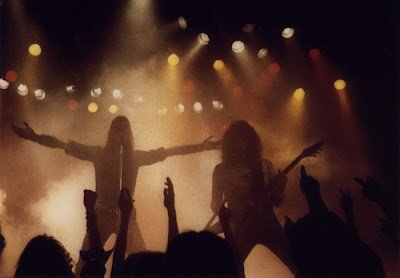 The correct way is to pronounce it like a “K”; this is from the “Lord of the Rings”. However we always pronounce it with a soft “C” like an “S” like Searith, which is of course wrong, but hey, we all read the books. We should have read all the appendixes too, I guess! 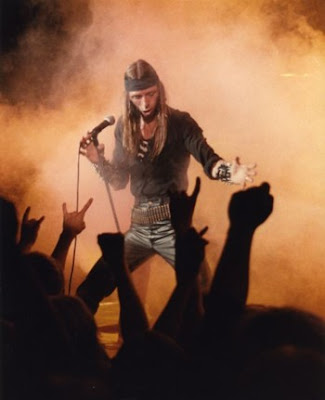 No one could really dance to our music. I remember once even yelling in the microphone for people to sit down and that we did not want "Any dancing fools." I think we were so into our music we took it as an insult and expected our listeners to sit down as if they were at a classical concert. 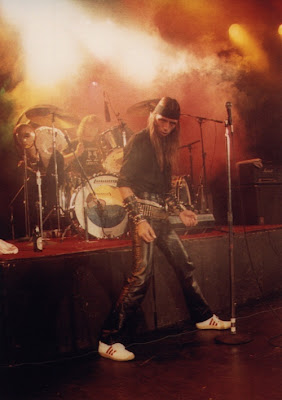 I am not completely happy with the legacy we have left behind but I am proud of “Frost & Fire” & “King of the Dead” as they are the albums that we had complete control over, and if we could have remained in control of our music the rest would have been as good!

When I look into the mirror and deep in my heart, possibly I am the one to blame for Cirith Ungol’s failure. This is the burden that I must carry the rest of my life, and is my greatest sorrow. All I ever wanted to do is play drums and I still dream at night about getting a new set, or the band getting back together. I am haunted and tortured by the ghost of Cirith Ungol, and I am not sure that I will ever find peace.