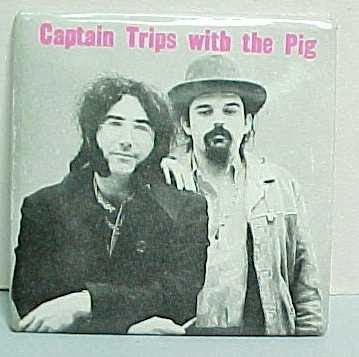 For a while there Skullfuck (more tastefully known as Skull & Roses and, officially, The Grateful Dead) was basically my #2 favorite Dead LP (behind American Beauty, just edging out #3 Europe '72, #4 Workingman's Dead, #5 Live/Dead, #6 Anthem of the Sun, #7 Blues For Allah, #8 (In the land of the dark the ship of the sun is drawn by) The Grateful Dead, #9 Wake of the Flood, #10 Aoxomoxoa and #11 From The Mars Hotel after which the rest can get pretty wack unless it's live which is where all the picks, boots, tapes, burns, downloads and streams come in if they haven't already) but, to my surprise, today it just didn't take. I think it's because we started on Side 2 when the shuffle picked up "The Other One" and we decided to let the whole thing roll. The drum solo just didn't feel right as a starter and the album never really found its feet. "Me & Bobby McGee" and "Wharf Rat" did both sound as great as ever, though. Bear's Choice ended up coming on next, first time I've listened to it. Nice 1970 acoustic-set material on the first side (gotta love "Wake Up Little Susie"), and the second side is mostly a superb "Smokestack Lightning," 18 minutes long. Great gnawing guitars, sprawled-out swagger from the rhythm section, and Pigpen just might actually be the greatest American white blues singer. That may be a controversial opinion, now accepting challenges in the comments section. To supply some context for my claim, I should tell you that my criteria is simply that the singer must have recorded a fair amount of blues covers/standards. My other contenders would be Don Van Vliet and Al Wilson. I really can't think of anyone else right off the top of my head. I'm sure I'm forgetting someone huge/canonical/obvious here... right? Janis Joplin? Greg Allman? John Hammond, Jr.?? I guess Elvis Presley could be in there, although that opens the field to 1950s rock'n'roll and rhythm & blues at which point you might as well include Hank Williams, and so on. I'm a little confused now, but hey, Pigpen rules. This "Smokestack Lightning" is from 2/13/70 at the Fillmore East in NYC, and if that date sounds familiar to you it's because this show was heavily Picked by Dick for his acclaimed #4. No "Smokestack Lightning" on there, Bear got to it first, which makes his Choice an essential pre-Dick Pick. Next the iPod played the Grouper/Inca Ore split cassette. I think 40 or 50 copies were handmade for a tour or something, and if I'm not mistaken this is the same stuff that was just released by these two on a split LP. I just ordered a copy, I'll let you know. Either way, this is good stuff. The Grouper side has about four songs and they're right on a par with her last two full-lengths, Cover The Windows And The Walls and Dragging A Dead Deer Up The Hill. It also stands as a transitional work between the two, as you can hear her beginning to dial down the oceanic psychedelic wash-out of CWW and get into the lower-volume space and silence that works so well on DDD. The song "Poison Tree" is really standing out. As for the Inca Ore side, people seem a little more divided in opinion on her than on Grouper, and she can have a certain prankish cackle to her sound that I could see annoying people who are into the epic/somber Grouper tone, but I think her side here is pretty genuinely eerie and heavy, especially a long track consisting only of her double-tracked girl-ghost vocals and plenty of weird reverb. After that I put on mp3s of the new Om 7" for the Sub Pop Singles Club (already, within mere hours of its release, going for too much money on ebay). After it was over I played it again because even though I was listening, I felt like I didn't hear anything. I mean, sure, I did notice another ominous and quiet bass line that sounds similar to "Set the Controls for the Heart of the Sun" by Floyd, much like a lot of their last full-length, but after that, I'm just not sure. The B side is a dub version with gratuitous melodica. The new drummer does seem like he'll work out fine, there's potential there, I just hope this continuing move from tranced-out power-riffage to low-key and increasingly affectless meandering isn't a permanent one.

Pigpen deserves more love, for sure, especially his take on Smokestack Lightning. The one on Three From the Vault is really good, too.